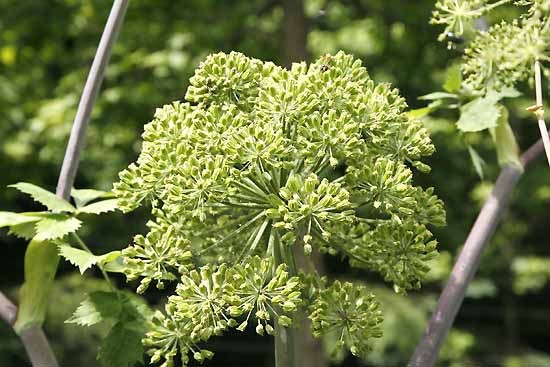 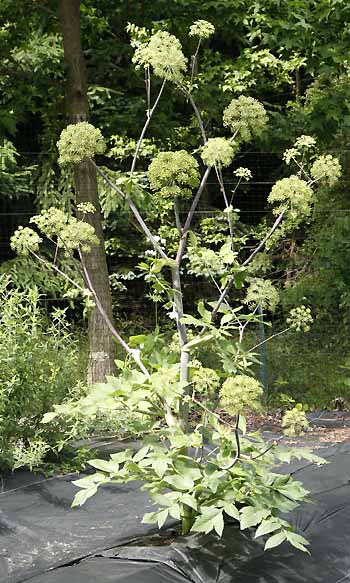 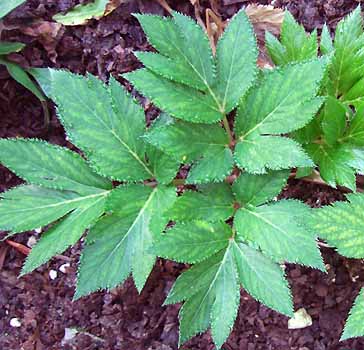 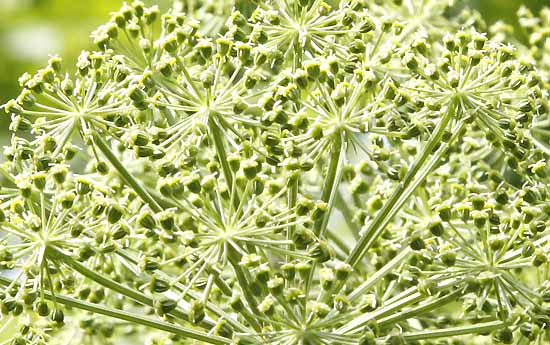 Angelica is a large impressive aromatic biennial plant for shady moist locations. It will grow in full sun in zones higher than 6 but some shade from full day sun is desirable. Loves rich moist soil. It produces large aromatic green leaves and in the second or third year flower spikes up to six feet high with globular green flower clusters 6 inches in diameter. Almost the whole plant is edible. Easy to grow once established. Wildlife, especially deer, love to eat it so it needs protection. Adds great drama to the garden even if not for eating.

Description of Angelica (Angelica archangelica)
Angelica is a large biannual sometimes triennial plant. In the first year it produces a small clump of mid green compound leaves that usually reach only about 2 feet (64 cm) in height. It is during this year that the main root forms. First year Angelica roots can become very large often weighing as much are three pounds. They are long, spindle shaped, thick and fleshy with many long, descending rootlets. During the second year, or sometimes the third year depending on growing conditions the plant produces much larger compound leaves that can be up to 2- 3 feet (64 -70 cm) in length and about 1/3 as wide with largest leaflets at the base of the compound leaf. The leaves are bold, bright to mid green, deeply cut with fine serrated edges and bold veins. In mid summer it sends up thick hollow stems that can rise to 6 feet (2 m) and are branched with far fewer small leaves. At the end of each branch is a flower head in the shape of a globe up to 6 inches (10-14 cm) across and composed of dozens of small greenish flowers with small white protruding stamens. These are followed by greenish yellow fruits that turn brown when ripe. In most cases the whole plant then dies. In ideal conditions the plant will produce side shoots which continue to live on when the mother plant dies. The whole plant is highly aromatic with a unique odor that some describe as slightly juniper others licorice. It is hardy to zone 4 and is not frost tender.

Location and Care of Angelica (Angelica archangelica)
Angelica prefers deep moist loam in a shady position. It much prefers a slightly acidic soil but will tolerate a range of pH. It thrives best in damp soil and likes to grow near running water. Angelica is a very tough plant and will grow in quite cold conditions. In zones 5 and above it can tolerate more full sunshine and in zone four it will easily grow in the open. In warmer zones (6-7) some sunshine is acceptable; lower zones need mostly shade. This plant will not do well in very warm zones and is not recommended for 8 and higher. In most zones growing in some shade is necessary. e.g. under deciduous trees or on the north side of buildings or on the north side of a screen of trees or tall hedge. Ensure it has shade from the noon sun and is in a location which although screened will allow cooling airflow. The plant can survive in full sun but it most likely won't flower.
Angelica needs a lot of organic material to flower well. Almost any soil type will do if the organic material is added in enough quantity and the plant is well watered. Running a soaker hose along the base of the plants is a good way to keep them moist if soil is not naturally damp. Do not allow the soil to completely dry out.
Angelica does not like to be transplanted due to the large roots that it creates. Pick your location well and allow plenty of room for the plants to grow into. Transplanting once the plant has begun to grow well usually ends in plant death.
If leaf production is required the flowering stems can be cut off.

How was your Angelica seed Handled?
Many places state that there is low germination on Angelic seed. This can be true depending on how the seed is stored. Seed is usually collected in the summer months. If that seed is sown directly it was most often germinate but often only at a rate of about 40-50%. If that seed is then stored at room temperature, often for fairly long periods before it is sent out to customers or, it sits in racks in the garden center for long periods at room temperature. This angelica seed is going to be in very poor shape and most likely will not germinate well.
For the best results Angelica seed needs to be collected, then stored at low temperatures until sent to the customer. Seed must then be stratified to break dormancy. When treated in this manner almost all the Angelica seeds germinate. We have done testing on seed and found that even older seeds from our 'discard' pile of over 3 years ago will still germinate almost 100% if given this treatment. Thus we cold store all our fresh seed to ensure that it is in the best possible shape for you. However you MUST stratify it before it will germinate.

Growing Angelica from Seed.
All our seed is cold stored to keep its freshness. Seed must be moist stratified before it will germinate, however if this process is carried out then almost all the seed will germinate rather than just a few seeds. Click here for detailed instructions on moist stratification.

While angelica seeds don't need light to stratify they do need light to germinate. So when sowing seeds, do not cover them, place on the surface of the compost and sprinkle a little potting mix to ensure good contact with the soil. Moisten the soil and place in a plastic bag. Seeds can be sown in seed trays or small pots depending on what is best for you. If you don't have a cold period in your climate or if you obtain your seeds later in the year seeds can be placed in bags in the refrigerator. See stratification instructions for more information.

For cold outbuilding method place seed trays in a window so that they get some light, keep vigilant until they germinate. Alternatively they can be cold stratified for at least 30 days then brought into a slightly warmer (but not warm) location in the light and treated like any other seed tray. We have found that the seeds germinate extremely well using this method.

For refrigerator method, place in bag with moist soil for at least 30 days, although 40 is better. Then remove and place seeds in a flat or plug tray, place in cool area and treat as a normal seed tray.

Again do not cover seeds. Keep constantly moist until the seeds germinate, best temperature is around 65 F (18°C) any warmer and they may not sprout. Transplant when the seedlings are large enough to handle and plant on into their own pots. Grow on until plants are large enough, then harden off outside in shady location before transplanting to final location. Since angelica produces large roots ensure that all the soil is moved with the plant and keep root disturbance to a minimum. Plant at least 3 feet (1m) apart.

Be aware that this method will ONLY work for seed that has been cold stored. If you seed has been at room temperature for more than a few days (e.g. while it was being shipped) the seed may not germinate even if it is moist cold stratified.

Harvesting Angelica. (Angelica archangelica)
Some leaves can be picked during the first (rosette) season of the plant, but don't take too many as the plant is using its resources to make the large thick roots.
Leaf harvest is best done from early second year plants before they begin to flower. If the flower stalks are cut off the plant can be persuaded to grow for many years, often becoming more of a perennial. However in warmer zones this can only be continued for a few years before the plant tends to die. Allowing the plant to flower at the end of 4-5 years is the best option. For best results harvest leaves until the plant flowers then allow it to seed.
Fruit harvest, cut when they are still green before they ripen.
Seeds. Leave on the plant until they turn brown. For culinary use ensure seeds are totally dry before storing in sealed containers in cool dry area. For seeds to plant, collect seed and immediately refrigerate until seeding is desired.
Stems. Can be harvested while still young but large enough to handle. These can be dried, candied or eaten as vegetables.
Roots. Best dug at the end of the first year when they are at their largest. Roots can be quite large and sometimes difficult to dig up. Roots can be used fresh or immediately dried for later use.

Pest Problems with Angelica (Angelica archangelica).
This plant tends to be pretty hardy and does not have that many pests. It can attract aphids, red spider mites and leaf miners (less common) but the flowers also attract a myriad of native insects which prey on these pests so most often they don't stay on the plants long and can be left for the 'locals' to clean up.
Roots can be the main problem. Many rodents such as voles and mice will eat the roots during the winter months it they have the ability to get to them. This can occur when snow is on the ground but enough melting has occurred for the rodents to move around under the snow. They can burrow into the soil around the roots, or more commonly use the tunnels created by moles to reach and devour the roots. Controlling moles or using mole repellent is the best option for control.

Culinary Use of Angelica
The whole plant is edible, leaves, stems, seeds and roots. It is often eaten as a vegetable in Northwest Europe and Siberia. The pealed stalks can be eaten raw with a dip like celery. They can also be cooked and used either as a side dish or on any other dish that requires vegetables. Stalks can also be candied for use in confectionary. The whole plant has a mildly licorice flavor.

Medicinal Use of Angelica (Angelica archangelica).
There are many varieties of Angelica, but Angelica archangelica is the only one officially employed in medicine. It is especially useful for treating digestive disorders and blood circulation. The root is the most active medicinal part and retains its use for many years. Leaves and seeds can also be used. Infusions are used to treat flatulence, indigestion, chronic bronchitis and typhus. It has been shown to stimulate blood flow in peripheral parts of the body (such as fingers and toes) and is used to treat poor circulation. However it should not be used for those with a tendency towards diabetes since its use can increase sugar levels in the urine.