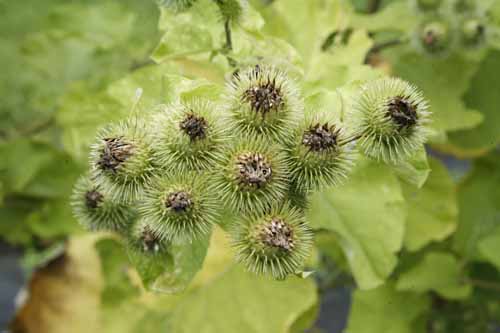 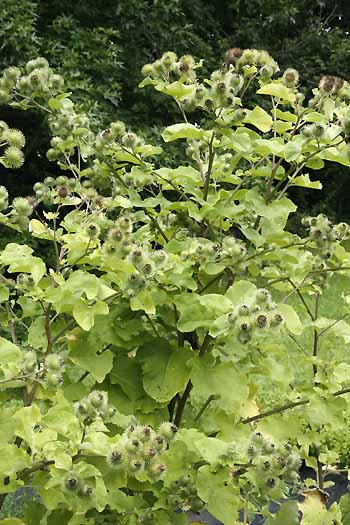 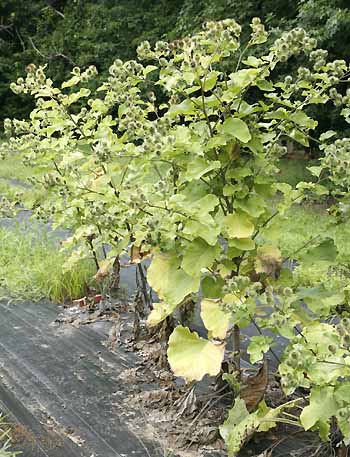 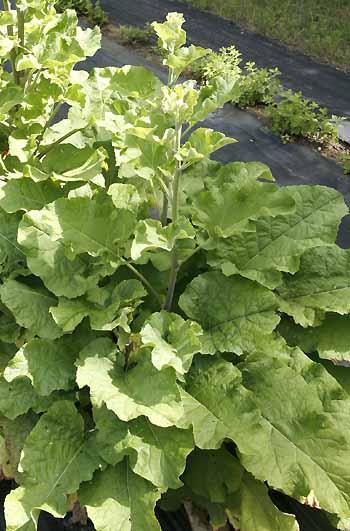 Burdock is a strong bold tall plant that makes a statement. It has large leaves but fairly small flowers that are encased in gumball sized globes that are covered with burrs. It is a tolerant plant and will grow almost anywhere and in any soil; it does need water and prefers full sun to prosper. It produces edible roots, leaves, stalks and seeds. It can be grown as an ornamental or as a vegetable. Butterflies, bees and native bees love the flowers and it will attract beneficial insects to your garden. Goldfinches also love the seeds so if you want them you need to get there first. Deer and rabbits don't eat it.

Description of Burdock. (Arctium lappa)
Burdock is a biennial (lives 2 years) and is hardy to zone 3. During its first year it produces a rosette of large basal leaves which are large and heart shaped with fairly long stout stalks. These will die back during cold winters but regrow the following spring. During this first year the plant produces a large strong tap root. In the second year the leaves increase in size and can become quite large over a foot or more in length: dull, pale green on the top and grey underneath from the mass of fine down that covers them. The leaves are thick, slightly rough, strongly veined with wavy edges. In early summer it puts up strong thick stalks that can reach four feet or more in height. These are much branched with smaller leaves that are more egg shaped and not as downy. Each branch terminates in longish stalked flowers. The flowers themselves are tubular, purple in color and fairly small, they are surrounded by large involucral bracts. These resemble small balls, about the size of a gumball, but have stiff spiny hooks that are extremely adept at adhering to anything that passes. Once stuck they are extremely difficult to remove.
It is a very dramatic and strongly defined plant. Excellent for back borders or groups.

Location and Care of Burdock plants.
Burdock will grow almost anywhere and on any soil but the roots form best in a well drained soil. Prefers a small amount of shade during the day. If grown on heavy clay soil a full sun location is more suitable. Tolerates a large range of pH. It needs a moist soil if cultivating for size and roots; a soaker hose is ideal as it allows the plant to be watered without anyone getting near the plant or its burrs.
If growing for root harvesting burdock should be planted fairly close together as this encourages the development of long straight roots. Plants can be grown 6 inches (15cm) apart in rows 12 inches (30cm) apart. If only growing for display plants can be grown alone.
Since burdock plants produce a large taproot they do not like to be transplanted. Once they have passed the small seedling stage they should not be moved. This will damage the taproot and the plant will not develop well. Potted plants must be transplanted with all their soil intact, do not disturb the roots in any way.

Growing Burdock from Seed.
Seeds can be sown in place in autumn, or they can be sown in spring. Or they can be started indoors for later transplanting. In all cases seeds need light to germinate. If only a few seeds are available indoor starting is recommended to ensure wildlife do not eat surface sown seeds.

For direct seeding lay seeds on top of soil about 3-4 inches apart; since germination can be erratic plants can be thinned after they sprout to 6 inches apart with rows about 2 feet apart. If cultivating as an ornamental plants can be sown up to 3 feet apart to allow for spread of branches.

Starting indoors. Seeds are fairly large so starting in individual pots is recommended. Sow 2 seeds to a pot since germination can be erratic. Germination rates can be improved by pre-soaking the seeds for 12 hours or by Scarification. when plants are large enough place outside to harden off then transplant to their permanent location before roots grow on the bottom of the pot. Ensure that all the soil is transplanted with the plant so that the taproot is not disturbed.

Harvesting Burdock (Arctium lappa).
Roots are best harvested when they are no more than 2 feet (60 cm) long. Very old roots tend to become woody at the core . Roots are white when dug but discolor rapidly when exposed to the air. They are fleshy and wrinkled, often with a thick bark that can be a quarter of the diameter of older roots. This needs to be peeled off before eating. Roots are harvested in the fall of the first year. Depending on your soil, roots can be quite difficult to dig out since they can be two or more feet in length or, if plants were not grown close together, they may have branched. Roots can weigh 2-3 pounds each.
Leaves can be harvested at any time, cut a few at a time and not too many from each plant to allow it to regenerate.
Seeds. To harvest seeds wear leather gloves and clothing that won't catch the burs. Cut flower clusters, into a container and extract seeds by shaking.
Caution. Wear respiration apparatus when processing seeds. The tiny hairs from the seeds can be inhaled and these are toxic. They are very tenacious and get everywhere. Its very unpleasant. We recommend using disposable clothing as the hairs get in everywhere and are almost impossible to remove. They are itchy and irritating. Never get near burdock seed heads without a face mask.

Edible Uses of Burdock (Arctium lappa)
Root is the major part that is eaten. Very young roots can be eaten raw but mostly older roots are used and they are normally cooked. Roots need to have their bark removed before eating. Young roots have a mild flavour which increases with root age. The roots contains about 45% inulin, a starch indigestible to humans but may ferment in the gut causing wind in some people.
Stems. Young stems can be eaten raw or cooked and used like asparagus or spinach. They test best if the rind is removed. Leaf stalks can be parboiled and used as a substitute for cardoons. The pith of the flowering stem can be eaten raw in salads, boiled or made into confections
Leaves. Young leaves can be eaten raw or cooked; they have a mucilaginous texture
The seeds can be sprouted and used like bean-sprouts

Medicinal Uses of Burdock (Arctium lappa)
The dried root from one year old plants is the portion of Burdock most used in Herbal medicine. Burdock root is considered one of the foremost detoxifying herbs in both Western and Chinese medicine. It is used to treat 'overloads' of toxins such as heavy metals from the body. Thus it is considered to be a good blood purifier. It has soothing mucilaginous properties and is said to be one of the most certain cures for many types of skin diseases, burns, bruises, boils, bites, rashes and other skin problems. It is also considered to be a good blood purifier as well as being used for throat and other infections,

An infusion of the leaves is used to help tone the stomach and digestive tract and to treat long standing indigestion. The leaves are also used in a poultice to treat tumors and gouty swelling as well as bruises and inflammation.
The seeds are used to make a tincture and fluid extract for treating chronic skin diseases. Recent research has shown that seed extracts lower blood sugar levels.