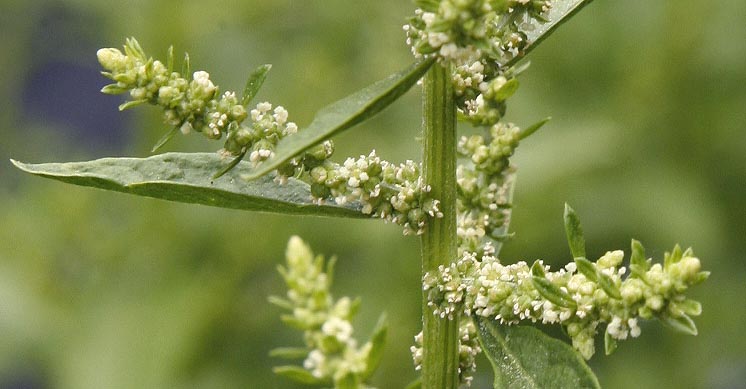 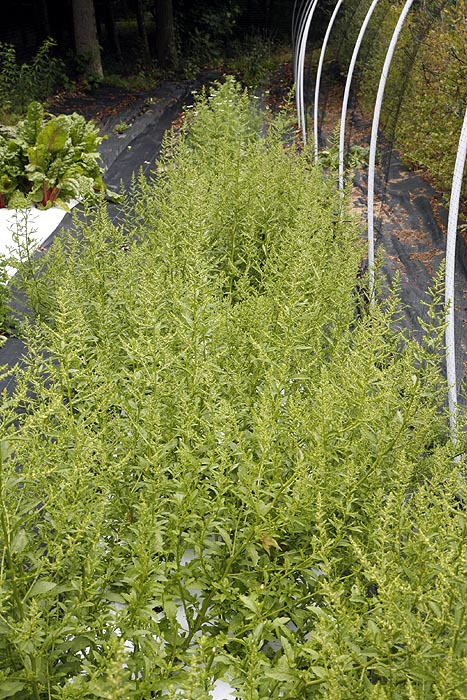 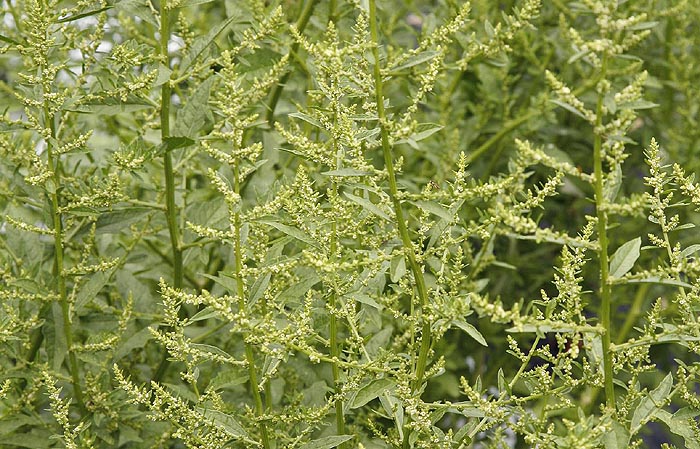 Description of Epazote (Dysphania ambrosioides or Chenopodium_ambrosioides).
Grown as an annual it may behave as a perennial in some warmer locations. The plant produces small spear shaped leaves in mid to lighter green that have gentle scalloped edges and veins that look as if they are semi melted into the leaf surface. Leaves are arranged alternately on the upright stems. Flowers are produced on their own small stems with tiny leaves interspersed that arise from the leaf nodes. The flowers are extremely small, white or pale green and mostly insignificant, seen only as 'small bobbly bits' that create more bulk to the plant stems. Flowers in mid to late summer. Stems can grow to 48 inches tall but may tend to flop over in windy areas. The leaves have an extremely strong and unique aroma that is very difficult to describe. Some have tried with a mixture of citrus, petroleum, savory, mint and camphor. For this reason most animals do not eat the plant to its definitely deer and rabbit resistant.

Growing Epazote (Dysphania ambrosioides or Chenopodium_ambrosioides) from seed.
In warmer areas seed can be strewn on the surface and kept moist until germination. However since the seeds are small indoor seed starting is recommended. Sow in cell packs, plug trays or flats and barely cover the seed. Keep moist until the germinate which can be 7-21 days depending on conditions. Keep the seeds warm, around 70° F is ideal and warm window ledge or sunny spot is best. Transplant to individual pots when the seedling are large enough to handle and harden off before planting out. For more detailed information on starting seed see our General Growing Instructions.

Location and Care of Epazote (Dysphania ambrosioides or Chenopodium_ambrosioides).
Epazote prefers full sun since it is native to Mexico it can tolerate a lot of heat. It is also extremely drought tolerant and makes a good green ground cover in areas where little else will grow. Not fussy about soil type and will grow in rather poor soils. Does not like wet or waterlogged soils, must be well drained. Excellent plant for hot dry areas where few other things will grow.
Space plants at 6 -8 inches apart and water well until established then leave alone. If grown for constant harvesting some daily water is recommended to ensure a good continuous crop of leaves. Pinching the plant back will encourage side branches and more leaves. Can become quite bushy with a little pinching and makes a good low growing bright green foliage. Stems can reach 48" in height but may tend to flop over in windy areas. This will cause them to grow more side branches and look like shorter plants so no maintenance is needed if grow as a ground cover.
Caution. In warmer climates it will self seed readily and can become a weed if not controlled. Cut down stems after flowering to prevent seed dispersal. In higher zones seeds tend not to overwinter that well and replanting is necessary.
Edible Uses of Epazote (Dysphania ambrosioides or Chenopodium_ambrosioides).
Used mostly as a aromatic herb in Mexican cooking especially as seasoning for corn, beans, and sauces and other dishes such as: quesadillas and sopes, soups, mole de olla, tamales with cheese and chili, chilaquiles, eggs and potatoes, and enchiladas.
Medicinal uses of Epazote (Dysphania ambrosioides or Chenopodium_ambrosioides).
Helps to control indigestion and flatulence caused by beans, which is one of the reasons it is used as flavoring. Also in the treatment of amenorrhea, dysmenorrhoea, malaria, chorea, hysteria, catarrh, and asthma.

A strong tea rubbed on the skin repels insects and reduces irritation from insect bites. In sufficient dosage, and especially if the seeds are taken by themselves, the plant will aid in expulsion of intestinal worms.

Caution
In significant quantities, Epazote is poisonous. While it is safe to use as a culinary herb in small quantities, overuse can cause deafness, vertigo, paralysis, incontinence, sweating, jaundice, and even death. It is to be avoided by pregnant women and small children. Contraindicated during pregnancy.
Other Names
American Wormseed, Chenopodium ambrosioides, Dysphania ambrosioide, Mexican Tea, Wormseed, Jesuit's Tea, Herba Sancti Mariæ, Apasote, Chenopode, Epazote, Feuilles A Vers, Herbe A Vers, Meksika Cayi, Mexican-tea, Paico, Pazote, Semen Contra, Semin Contra, Simon Contegras, Welriekende Ganzenvoet, Wormseed.
Scientific name
Dysphania ambrosioide used to be called Chenopodium ambrosioides then botanists decided it belonged in a different genus than Carl Linnaeus placed it in 1753. Sometime in the 1930's the new genus was applied to some Australian species and this has since morphed to encompass many others that were once in the Chenopodium genus. Today both names are still used depending on which botanical camp the user is aligned with. Constant name changing does makes things difficult for most people so we try and supply both names where we can.