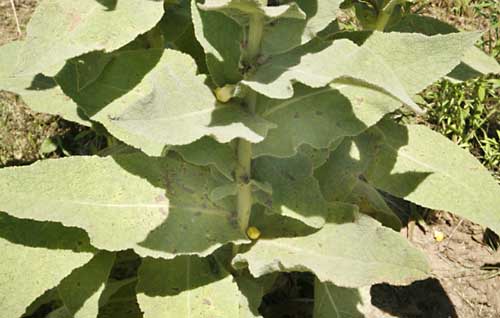 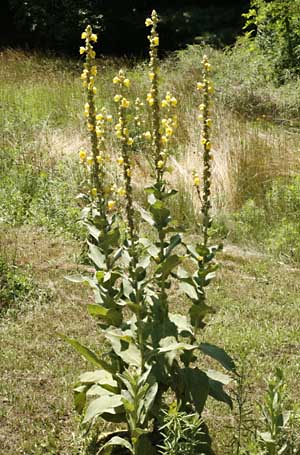 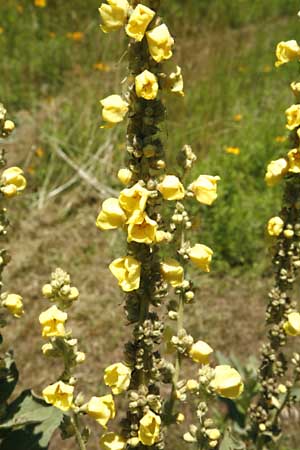 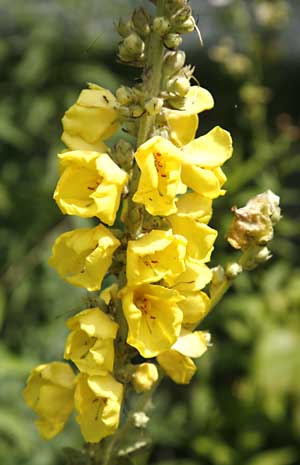 Spectacular tall spikes of bright golden flowers that bloom for several months. Producing several new flowers each day these spikes seem to go on forever and can be seen for a long distance. Preferring poorer soil and very drought resistant these plants need no maintenance once established and no watering. The large furry gray green leaves cover a lot of ground and keep the weeds down and the deer and rabbits don't eat them. They are biennials - flowering in the second year, then dying. So new plants will need to be added each year to keep the flower display going, but its well worth it for the long lasting display. No sunny garden should be without them.

Mullein is a biannual meaning it does not flower until the second year, then it dies. During the first year it produces a rosette of leaves that are fairly flat to the ground. The leaves are quite characteristic, thick, wide very light green with a silvery hue due to the fuzzy coating of fine white hairs. Leaves can be up to 15 inches (38 cm) long with the whole rosette about 24 inches (61 cm)in diameter or more. First year leaves rarely reach more than 18 inches (46 cm) from the ground.
The following spring the plant puts up a single thick solitary pale stem which can grow up to 8 feet (2.4 m)in height. It is usually unbranched but occasionally one or two side branches will occur. The stems are also covered with the downy white hairs. The leaves are simple stem less oblong tapering to a point with smooth or slightly crenulated margins gray green and covered with downy white hairs. The leaves are larger at the base up to 12 inches (31 cm) long and 4 inches (10 cm)across becoming smaller as the ascend the stem. The are positioned on alternate sides of the stem . The leaves are simple and arranged so that the smaller upper leaves direct any water down to the larger leaves below and hence to the ground. This allows the mullein to collect more rainwater on the very dry soils it tends to inhabit.
The tall stem is topped with a flower spike usually about a foot in length which is packed with small sulphur yellow 5 petaled flowers about an inch across. The flowers open a few at time at random over the flower spike not in a progression from top to bottom as in most flowers. Thus the flower spike always has some blooms on it during the flowering period which can last from 6 - 8 weeks from early summer onwards. The flowers are followed by small seed capsules each with two cells containing numerous seeds. The spike is very dense and will remain standing throughout the winter even under some very harsh conditions. It is a native to Europe.

Growing from seed is easy. We recommend that seeds are started in pots and grown into larger plants before transplanting outside since scatter seeding tends to be a little hit an miss - see self seeding above.
Seeds are small so sow following our small seed sowing directions, then pot on into larger pots as the plants grow. Seeds need light to germinate so don't cover them. Keep the soil moist until seedlings appear. Transplant into individual pots as soon as they plants are large enough to handle. Mulleins develop tap roots so pick the tallest pots you can to pot into. Grow on until plants are large enough and danger for frost has passed before setting outside. Dig large holes and ensure that the root is not disturbed when transplanted. If the roots have began to protrude from the base of the pot cut the pot off the plant do not force the roots apart or the plant may not survive.
Water well when transplanting and every other day thereafter - if no rain - for at least three weeks if the plants look happy and beginning to establish themselves watering can be stopped at this point, only continue to water until the plants are putting out new leaves and look established. Plants should need no extra water even in drought.

Really easy plant to grow and maintain. It must have full sun and cannot tolerate any shade. It prefers sunny areas with poor soil that is not cultivated. An old lawn, back meadow or stony ground is ideal for this plant. Once established it needs little care and the huge leaves create a circle around it that is weed free. The tall flower spikes can be seen for long distances and brighten up any area.
Mullein needs a well drain soil and cannot tolerate heavy clay or waterlogged soils. The flower spikes are tough and can tolerate fairly strong winds but it does not like salt air or sea winds so it is not suited to seaside gardens. It is very drought tolerant and needs no additional water once established. It is ideal for stony, sandy areas where little else grows well. Hardy to zone 3.

Mullein is ideal for back borders, cottage gardens and as focus plants. They can be grown individually or in groups. If planting in a cottage garden or border be aware that the leaf base gets very large and will smother anything else around it so give the plants plenty of space. Space at least for 3 feet (1 m) apart. If for a back border ensure that they have sufficient light in the first year when the rosette is only at ground level if they are overshadowed or shaded by other plants they will not survive.

If growing in an old lawn or meadow location care should be taken when mowing not to cut down the first year plants. Mulleins will self seed but they never seem to seed where you want them too. Learn to identify the new plants and either mow around them or dig them up and move them to the desired location.

Flowers. Since the flowers bloom a few at a time every day harvesting flowers is a ongoing process. Plants must be visited each day and the new blooms removed. I prefer to do this in the early afternoon when the insects have had time to visit the flowers and pollinate before I come along and remove the petals. Make sure when harvesting flower petals not to collect any seeds. Mullein seeds are poisonous so take great care not to collect with flowers.
Leaves. can be collected from the first year plants and during the second year in the early spring before the plant flowers. Any preparation using the leaves should be carefully filtered to remove the fine hairs which can be very irritating to both the skin and throat.
Roots. Roots should be dug up at the end of the first year, wash and dried either sliced or whole.
Both leaves and flowers can be placed on racks to dry or use a dehydrator.

Note. The leaves can be an irritant. If rubbed against the skin it can cause redness and irritation (its due to the hairs). So take care not to choose these large fluffy leaves and substitute towels or 'body part' wipes.

Mullein has been used in Europe as a remedy for respiratory disorders including cough, bronchitis and asthma. It acts by reducing the formation of mucus and stimulating the coughing up of phlegm thus helping to remove the infection from the body faster and more efficiently. It is also used to soothe throat irritation, clear congestion, control diarrhea and increase urine production. Mullein leaves contains a high proportion of mucilage (large sugar molecules); mucilage is generally thought to have a soothing effect. Externally the leaves are used to treat wounds, ulcers, tumors and piles and to calm the pain and inflammation of hemorrhoids and create softer skin.

Note. Any preparation made from the leaves needs to be carefully strained in order to remove the small hairs which can be an irritant to both the skin and the throat. This can be extremely unpleasant and needs to be avoided.

An infusion of the flowers in olive oil is strongly antibacterial and is used as earache drops, or as a local application in the treatment of piles and other mucous membrane inflammations.

The roots are used to make a decoction that helps to reduce toothache, as well as relieve cramps and convulsions. Powdered the roots are used as a rough wart remover although it appears to have no effect on smooth warts.

Seed. There is contention over the use of seeds. Many state that the seeds are poisonous and should be avoided at all costs others state that a decoction of them can be used to soothe chilblains and chapped skin.

Dye. The yellow flowers have been used for centuries as a dye for wool and hair.
The leaves of mullein and the dry stalks are considered as some of the best fire starting tinder available. Leaves are often carried in survival kits for this purpose. Carefully twisted they were once used as candle wicks. The dried flower stalks have been used as torches for centuries, dipped in tallow and set alight they will burn for long periods of time. The leaves also contain rotenone which is used as an insecticide.

Toilet paper: while some have stated that Mullein leaves can be used as substitute toilet paper since they are so large and soft care should be taken as the hairs tend to break off and can be very irritating. Try it on your arm or leg to see if you have a reaction before you subject more tender parts of your anatomy.