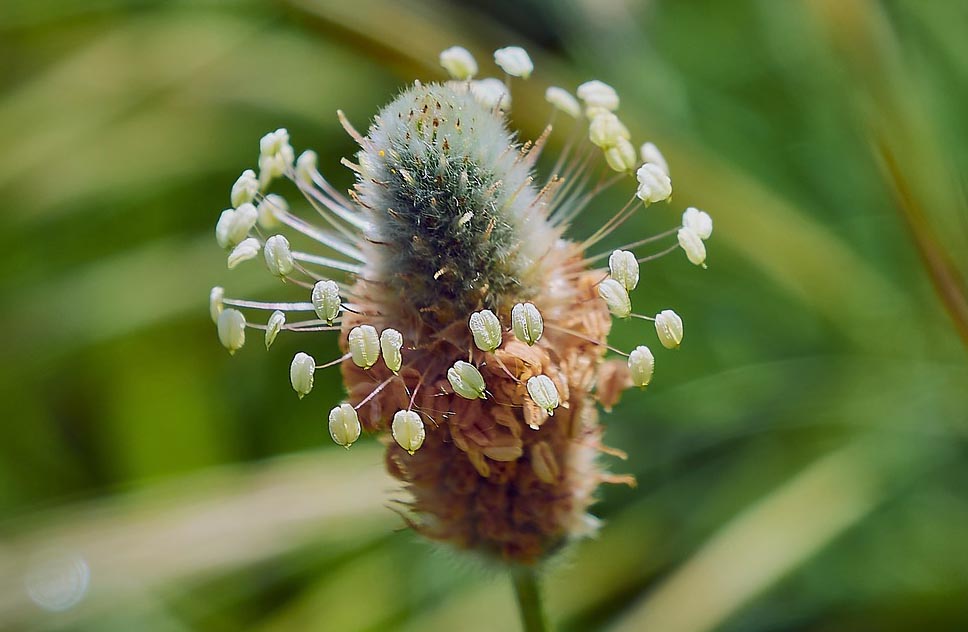 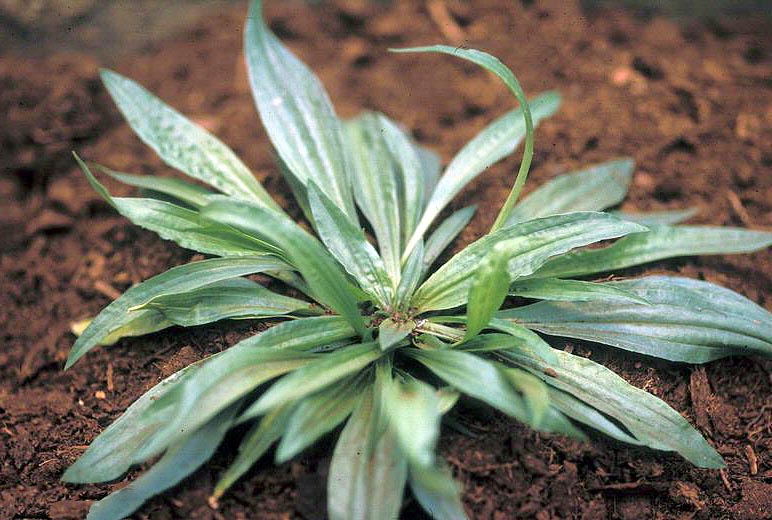 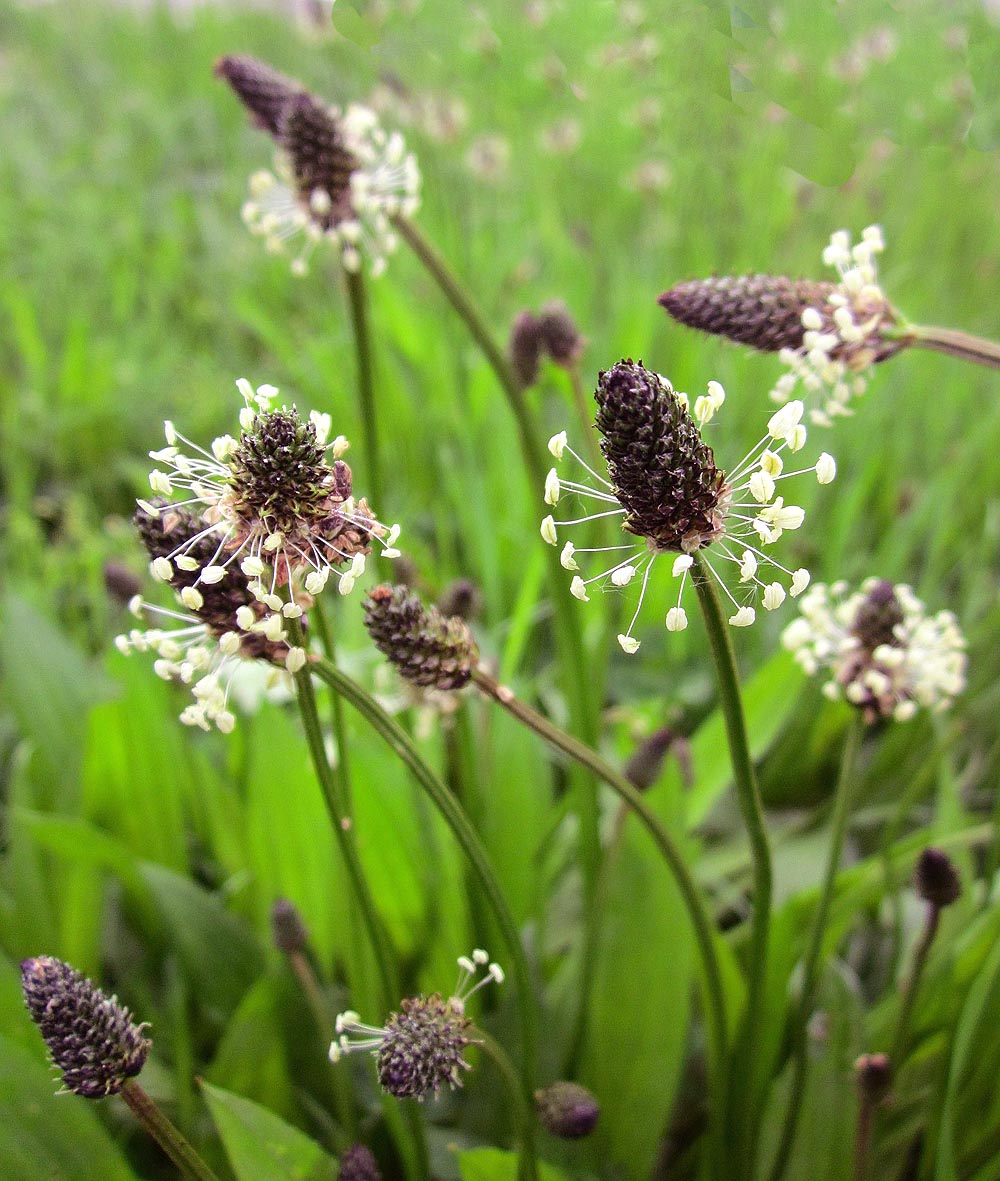 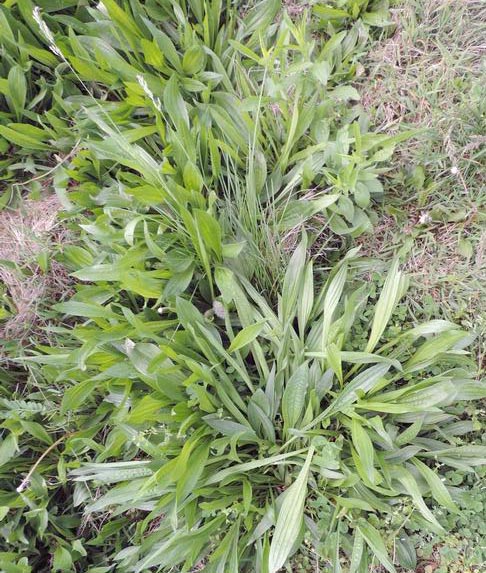 Tough perennial hardy to zone 3 will grow almost anywhere that is not waterlogged. Not fussy about soil type and is drought tolerant. Can grow in compacted soils. Needs full sun to partial shade but takes not care at all once established. Can tolerate mowing and foot traffic. Used medicinally and very nutritious although slightly bitter for human tastes animals love it. Often grown in pastures for domestic animals and free-range chickens who adore it. Very resilient grows back fast after being eaten. Also used medicinally to help staunch bleeding and aid with digestive issues. Contains mucilage making it useful in baking and as a thickener as well as aiding digestion. Buckeye butterflies use the plant as a food source.

Description of Lanceleaf Plantain (Plantago Lanceolata).
Hardy perennial to zone 3 that most commonly keeps its leaves over winter in most zones. The leaves are long thin, mostly lance shaped. They can be up to 10 inches (25.4 cm) long and 0.75 inches (1.8 cm) in favorable conditions but most commonly are shorter. They are stalkless with pointed tips and narrowing folding inwards at the base to a narrow point directly at ground level. Each leaf has 3-5 parallel veins running top to bottom, mid green in color with spare hairs. Leaves form in a circular rosette on the ground and exhibit different growing styles depending on location. In areas where there is mowing or grazing the leaves are held flat against the ground and tend to be shorter. In areas where there is no mowing and little grazing plants are much more upright holding leave tall and growing much larger depending on their location
Flower stalks arise beginning in late spring and can continue until autumn. They can be up to 18 inches (46 cm) tall depending on location. Stems are stiff leafless with a few scattered hairs. Each terminates in a cone shaped flower spike up to 2 inches (5 cm) long. Each spike is made up of a multitude of tiny brown flowers that are mostly inconspicuous, the only noticeable portion is the larger protruding stamens that project out from the spike and ascend the spike from the base to the top as the flowers open. Flowers are wind pollinated so have no scent. They are followed by small brown seed capsule containing two seeds.
Growing Lanceleaf Plantain (Plantago Lanceolata) from Seed.
Very easy can either be direct sown after frost danger has passed and then at any time throughout the growing season or started indoors for larger plants. See our General Growing Instructions for more details on starting seeds.
Location and Care of Lanceleaf Plantain (Plantago Lanceolata).
Best grow in full sun to partial shade. In colder zones 7 and colder full sun is recommended. In warmer zones some shading is suggested but not full shade. This perennial is very hardy and will cope with most growing conditions and soil types except waterlogged soils. Can grow in heavy clay provided that it does drain and not pool water for more than a few hours. It is very drought tolerant and tough. It is often grown in meadows to provide diversity. there is will flourish producing long tall leaves. It can also be grown in areas that are constantly mown and is often found in compacted soils, where it and its close relative the broad leafed plantain (Plantago major) are often used as indicators of such compacted soils. Its strong roots help to break up the soil slightly but gives it the advantage since most other plants cannot grow in such conditions.
Its fairly drought tolerant as well as heat and cold although it is not recommended for full sun in hotter zones as it is native or cooler northern climates it does not do as well.
Makes an excellent addition to lawns and pastures. For those domesticated animals plantain provides nutritious food and is often sought out by rabbits, chickens and turkeys.

For those wishing to harvest the leaves growing in a more protected location that allows the plants to grow more upright provides much easier harvesting. Offered good soil regular although not frequent watering and some feeding produces lush growth year round.

Pollinator and Wildlife with Lanceleaf Plantain (Plantago Lanceolata).
Since its wind pollinated it does not attract insects but Buckeye butterfly larva prefer it as a food source. Many animals like to feed on the nutritious leaves including deer, rabbits, small rodents as well as larger domesticated animals like cattle, chickens, alpaca and others. If attempting to encourage Buckeye butterflies protect at least some plant from domestic animals.
Harvesting Lanceleaf Plantain (Plantago Lanceolata).
Leaves can be harvested year round but if constant harvesting is intended growing some plants in a protected area where they can grow upright is strongly recommended as it is much easier to harvest. While plants can be harvested from mown areas its much more difficult as the plants grow in a more protected manner with leaves as flat to the ground as possible. To them this is a defense mechanism to prevent their leaves from being mown and to make it harder for animals (which includes you) to get at their leaves. This makes it quite time consuming to harvest so set aside a protected patch and make your life so much easier.
Culinary Uses of Lanceleaf Plantain (Plantago Lanceolata).
Young leaves are the most tender and can be eaten fresh or cooked. All leaves have a slightly bitter taste but they are very high in vitamins especially A, C and K. Older leaves are tougher and the long veins make the leaves stringy so they need to be removed which is a time consuming process. Flower head can also be eaten sautéed but are most commonly picked and used like capers. The seeds contain a mucilaginous substance making them more useful in desserts or ground and used as flour in breads where they can act like gluten. They are also used as a thickener in some ice creams.
Medical uses of Lanceleaf Plantain (Plantago Lanceolata).
The leaves contain mucilage making this plant very effective in the treatment of many digestive complaints including diarrhea, peptic ulcers, gastritis, irritable bowel syndrome. Also containing tannins helps it stimulate blood clotting making it an effective treatment for bleeding while the mucilage helps repair damaged tissues. The properties make it useful in treating makes it a excellent choice for effective treatment of haemorrhage and haemorrhoids as well as cystitis, bronchitis, catarrh, sinusitis, asthma and hay fever. Externally it can be used for cuts, stings, skin inflammations and even malignant ulcers. The seeds contain even more mucilage up to 30% which helps to sooth irritated membranes while working as a mild bulk laxative if whole seed is used including the husks it works as roughage. These properties also help in the treatment of parasitic worms. Reports of using the roots to treat rattlesnake bites are still inconclusive.
Other uses of Lanceleaf Plantain (Plantago Lanceolata).
Soaking seeds in hot water helps release the mucilage which can then be used as a fabric stiffener an alternative to 'starch'. The strong fibers of the leaf veins can be used to make paper or even reportedly textiles. A golden and brown dye can also be extracted from the whole plant.
Other names.
buckhorn plantain, English plantain, lamb's tongue, Lance Leaf Plantain, Lanceleaf Plantain, Narrow-leaf Plantain, Narrowleaf Plantain, ribleaf, Ribwort Plantain, Strap Leaf Plantain, Strapleaf Plantain