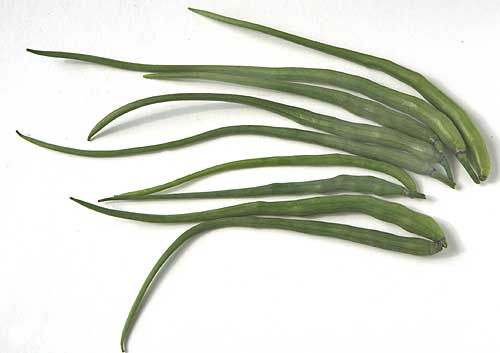 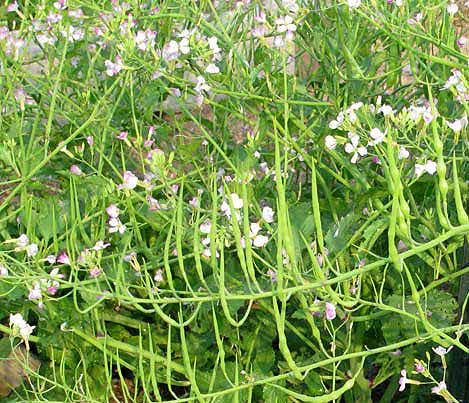 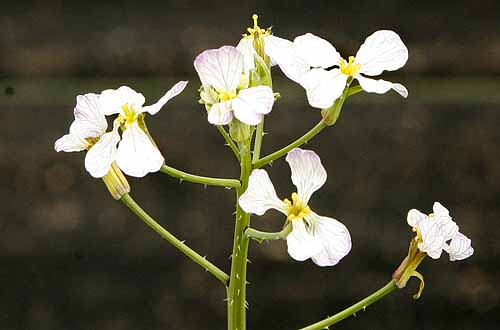 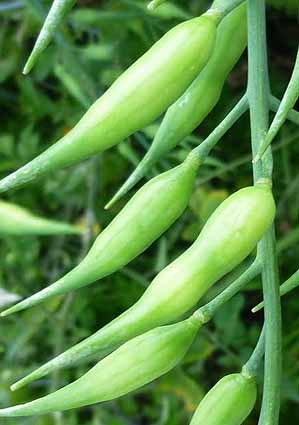 Getting tired of having to continuously plant radishes to get a crop for your salads, especially if you have moles and voles who love to beat you to the fat roots. Try rattail radishes instead. These crisp green zesty pods taste very similar to radishes, but they grow above ground and give you a continuous supply of salad ingredients throughout the summer without having to constantly replant. The major problem we found was keeping up with the amount of pods that the plants produced, you get masses of them! Plants begin to flower in early summer can continue to flower right up until the killing frost in late November (zone 6b). In warmer climates they will probably last a lot longer. Apart from staking to keep the pods upright and allow easy pod picking this plant is very low maintenance but some people find the smell of the plant objectionable, so don't plant it near your deck. Wildlife don't seem to eat it but butterflies and bees love the flowers. Since it flowers until late in the season is often one of the last flowers they can use.

Description of Rattail Radish (Raphanus caudatus).
Many sources state these look like traditional radish plants. Well I guess they do if you fed your radishes steroids! They are MUCH bigger. They start off looking very similar with a thick central stalk and leaves divided into sections along the length of the stem, rather like a giant dandelion (pinnatifid). Margins are erratically serrated and leaves are deeply veined with rough spots or spikes dotted across the leaf surface. Stems are also covered in small spines or spikes. The initial leaves are large up to two feet long and 6 inches across. Flower stems begin to arise early in the season when the plant is still small. The initial plant stalk tends to become the central stem or stalk but soon becomes much branched with dozens of smaller flowering stems that can reach several feet in length. Flowers are borne on the end of the stems in a much branched array each flower having its own stalk while the central stalk continues to lengthen and produce more flowers. Each flowering stalk can continue to flower for many months producing fruits along the stalk in all stages of maturity. Flowers are about a inch across with four petals that can be white, white tinged with lavender, or lavender purple and yellow centers and stamens. The resulting plant is a mass of crossing fruiting and flower stalks that can look very messy. Fruits come in two forms. The first are very long, thin and do resemble rat tails. The second are shorter pump in the center with pointed ends. The flavor is mostly identical in both.
Rattail radish roots tend to be wide and hollow, more like a cabbage stalk. They do not produce tubers as traditional radishes do. Plants can reach six to seven feet in height in good location but tend to fall over without support due to the mass of sprawling flowering stems. Seeds are much smaller than would be expected from the size of the pod. In right conditions will flower right up until killing frost.

Location and care
Needs full sun for best production with well drained soil. Is very happy in hot areas provided it has enough water to produce flowers and pods. Will grow on most soils except waterlogged. Does best with a good amount of organic material (compost) dug into the soil before planting. Water regularly for continuous crop. A soaker hose around the base of the plants with daily watering produces the best results. Less water will produce smaller pods, they may be hotter, but they tend to be more fibrous and tough so adding more water and having tender slightly milder pods tends to work best.
Adding a small amount of fertilizer once a week helps keep the plants strong and healthy. A top dressing of mulch around the plants once they reach about 3 feet in height can help to keep the weeds down and provide extra food for the plants.

Rattail radishes grow very quickly and begin to fruit in early summer. Plants can reach 5 feet in height and spread to about 2 feet. Choose your location carefully so it wont overshadow smaller plants in the area. We highly recommend staking the plants or they can droop over and sprawl across other surrounding beds suffocating nearby plants. Staking also makes it easier to harvest the pods which are produced prolifically from early summer until the frost kills the plants. For us that was late November (zone 6b) in warmer zones they will last longer and will overwinter in zone 8 or more.

Rattail radishes are not beautiful plants. We think they look more like 'going to seed' cabbages. They also have an smell which many people don't like, to us it seems like slightly rotting cabbage. Best not to plant it near your deck or other area that you use all the time just in case you or your guests don't like it.

Growing Rattail Radish (Raphanus caudatus) from seed.
Plants can either be sown directly into to open bed when all danger of frost has passed. In all cases clear ground and remove all weeds. For best results dig some compost material into the soil before planting. Seeds are fairly large and new plants are easy to spot when weeding. Keep area clear until plants are large enough to fend from themselves, then keep large weeds down with hand weeding.
Space plants about 24" - 30" apart. If planting directly, 2-3 seeds can be placed in same hole then thinned to strongest seedling once grown. Rows should be 3 feet apart to allow for spread and room to harvest the pods.

For longer fruiting season start seeds indoors in late winter, either in individual small pots or in cell trays. Seeds are large enough to handle alone. Germination is fairly rapid at warm temperatures. Follow our general growing instructions for seeds and plant out when leaves are about 2 inches long.

Harvesting Rattail Radish pods.
Harvesting can begin as soon as first pods reach about 2 inches in length. Many plant produce very long slender pods that do indeed look like flesh green rat tails. Others produce pods that are shorter and fatter more like little peppers. Harvest when the pods are tender and green before they begin to 'fatten' around the seeds. Once pods begin to fatten they get tougher and can be bitter.
Cut off any pods that become to large and fatten to encourage more younger pods to develop. With good sunshine, water and feeding these plants are prolific and may have to be harvested every two days to keep up with production. Store pods in the refrigerator until needed. They keep very well and can store for 3 weeks or more. (we found out by accident having forgotten a bag in the back of the fridge, they were just as good as when we put them in there).

Other edible possibilities
Some references state that the young leaves and flowers of this plant are also edible. We have not tried them. The flowers are quite small and don't last that long. The petals fall off fairly easily so picking them for eating would be time consuming for very little return in our opinion.

Using Rattail radishes.
These delicious pods can be used anywhere that a normal radish can. They don't have that white coloring that can give an interest to salad but they do have bite. Try them in nacho dips, can be used instead of peppers in many dishes. They can also be pickled, frozen or dried for later use. These are very versatile pods see what uses you can find.

Medicinal uses of Rattail Radish (Raphanus caudatus). .
Like many spicy foods radish is used to treat indigestion and as a laxative and for some types of parasites. More recent research has found that rattail radish pods have mild antioxidant properties and compounds that make it a possible for use in treating colon cancer.

Other Names.
This plant was originally describe by Linnaeus as Raphanus caudatus. However some botanists now think of it only as a subspecies of regular radish and thus call it. Raphanus caudatus var caudatus.
Believed to have originated in Java or Thailand it is also known as the Thai rat-tailed radish as well as serpent radish, or tail-pod radish