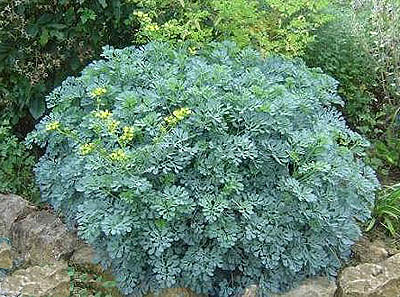 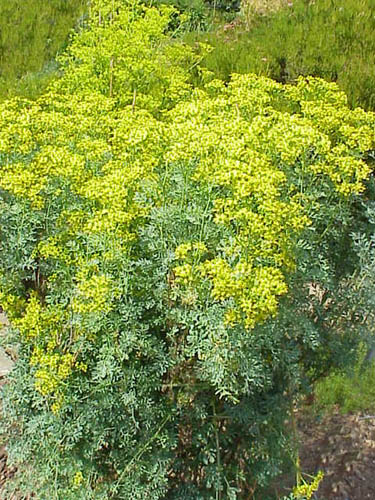 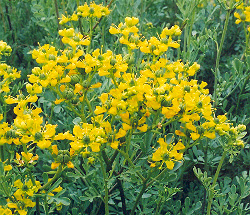 Rue is a very versatile small evergreen shrub that is an excellent addition to most gardens. It is extremely drought tolerant and is very happy in hot dry conditions once it is established. It will grow on poor soil and can grow in semi shaded locations but will not do as well. It has very attractive finely cut blue green foliage. The flowers are small conical star shaped with yellow or greenish-yellow petals born on short stems with wide terminal panicles blossoming from June to September.

The lower stems become woody but are mostly covered by foliage. It can grow up to three feet in height and can be pruned for a formal look if desired. It is often used for small hedges or knot gardens since it takes so well to pruning. It makes a great addition to any rock garden and since it flowers in summer gives extra interest when most rock plants flower in spring. Since it is semi evergreen it offers winter interest.

Take care when handling the plant as some people find that the oil from the foliage and sap can cause a rash, most people find it best to wear gloves. All parts of the plant are highly aromatic some say it has a disagreeable odor while others claim it is pleasant. The oil is often used to repel pests and it is very effective against Japanese beetles so is often grown as a companion plant to strawberries, figs, roses and raspberries. It also repels dogs and cats possibly because of the oils. This makes it an excellent small hedge plant to keep unwanted animals from your garden, but may not be suitable if you have pets.

The foliage is a favorite of the black swallowtail butterfly larvae, so for those interested in a wildlife garden it is a must. It's hardy to Zone 4, but should be mulched in the winter.

Rue has been grown since ancient times for use as a herb and for medicinal reasons. The leaves have a bitter taste but can be used as raw or as a seasoning, occasionally eaten in salads or brewed as a tea. It is strongly aromatic and slightly toxic, so should only be used in small quantities.

Medicinally it appears to have been considered a cure all. The most common use was to strengthen eye action since it contains flavonoids (notably rutin) that reduce capillary fragility. An infusion is used in the treatment of hysterical affections, coughs and flatulence. The juice of the plant has been used in treating earaches and chewing a leaf or two is said to quickly bring relief from giddiness, nervous headaches and palpitations. An alkaloid found in the plant is abortifacient, anti-inflammatory and antispasmodic. Other uses include abortifacient, anthelmintic, carminative, emetic, emmenagogue, expectorant, haemostatic, ophthalmic, rubefacient, strongly stimulant, mildly stomachic and uterotonic. It has been used to treat tetanus neuralgia dropsy rheumatism and jaundice. It was also used during the middle ages to repel pests and pestilence.
Large doses are known to be fatal and smaller doses have been known to cause miscarriages. The plant seems effective both fresh and dried.