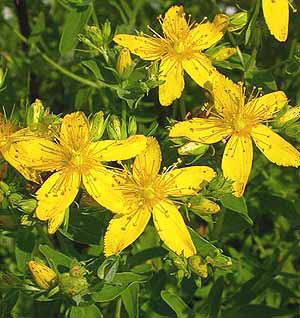 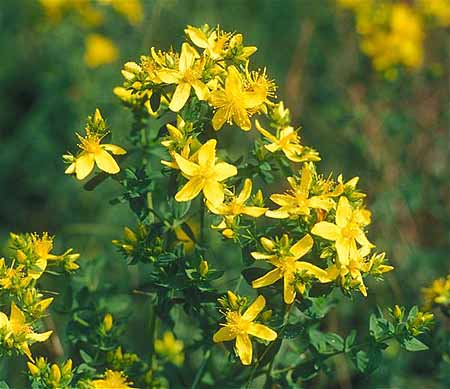 This interesting plant is very easy to grow and takes little or no effort once established. It is a hardy perennial with small oval green leaves covered with translucent dots, arranged in small rosettes at intervals of 1/2 to 1 inch around a thin upright stems. It grow from 1-3 feet in height and bears multitudes of small 5 petaled bright yellow flowers each speckled with a hint of redness around the edges and a bunch of fluffy stamens in the center. It blooms from May until September - depending on your hardiness zone and is very tough. Seeds will ripen from July until late September.

It will grow in poor soil although it will do better in richer ones. It can grow in sun or partial shade so is an excellent choice for the edges of a garden or just under trees where the bright flowers can lighten areas that can often look barren in summer months. It will grow with little moisture in semi shaded conditions, in full sun it will need a little moisture to be at it's best, but it will still grow. This makes it a good choice for a meadow garden or for those looking to attract bees and other beneficial insects.

It is hardy to zone 3, although some sources claim only zones 4-8

St. Johns Wort is considered as an all purpose herb since it has so many uses. It is known for it's calming effect making it valuable for insomnia, and nervous disorders such as depression and bedwetting. It is also used against menstrual disorders, depression and anxiety while also reportedly having the ability to reduce alcohol cravings. The oil is reported to have has remarkable soothing and healing action when rubbed into painful joints and strained muscles and to heal wounds. It also has possible antiviral and antibacterial properties which are being investigated as a possible treatment against HIV.

The crushed flowers produce a pigment named hypericin which is used to make dye that is so bright is almost fluorescent and is also the constituent under medical investigation.