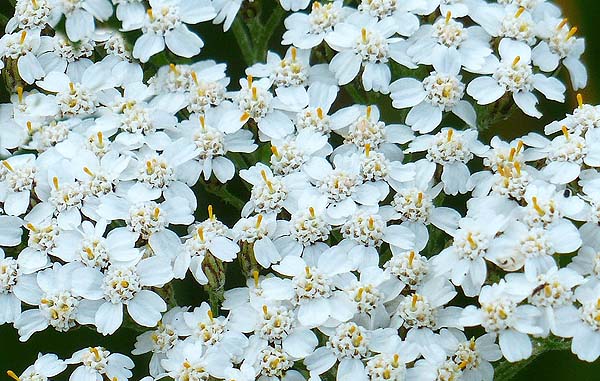 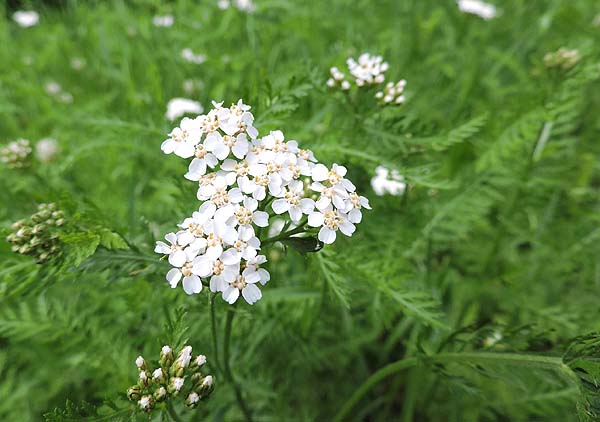 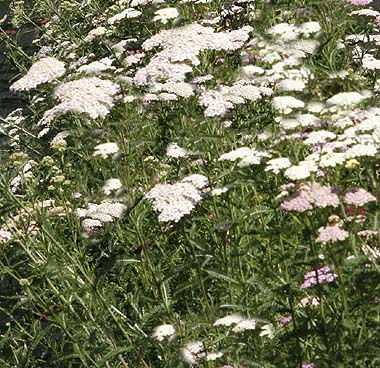 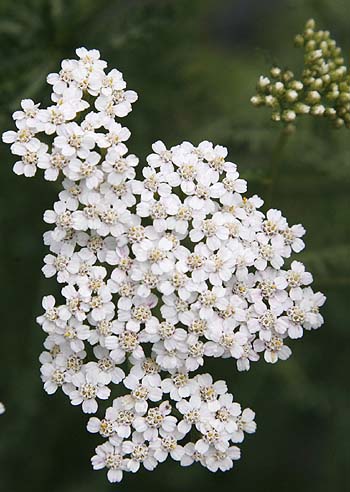 A really lovely tough perennial hardy to zone 2. It grows very well in hot dry areas and flowers for long periods. It can be stepped on mown and ignored and it will still thrive. Very drought tolerant and takes almost no care once established. Can be used as a ground cover in sunny dry areas then mown down once a year (in fall) to keep tidy. Deer and rabbits don't eat it. Will spread and can become invasive if not controlled but it's a small price to pay for this lovely hardy plant which can bring so many flowers to the garden for so long. Makes a great cut flower although some people don't like the scent.

Yarrow is a lovely tough perennial hardy to zone 2. In early spring it sends up a mound of fluffy feathery leaves that are bright to mid green and can reach up to 4" (10.5 cm) long and 1" (2.5 cm) across. Each leaf is made up of dozens of small leaflets that are much branched (laciniate) and arranged opposite along the stem. Each looks like a tiny tree with the whole being feathery or fluffy. From the mound of fresh green leaves the flower stalks begin to rise in mid spring . Stems can be branched and each branch is topped by a much branched flat cyme of flowers made up of dozens of tiny flowers with five outer petals and small inner tubular star shaped flowers with yellow centers. The whole slower head can be a up to 6" (15.25 cm) across with stalks about 18" - 24" (46 - 61 cm) tall. Flowers come in a range of colors. The original wildflower is white but some colors were found and later cultivated so now its found in cream, pink, red, salmon and lilac. Flowers have an interesting scent which some people like and others don't. Foliage is also aromatic. Long flowering with first major flush in late spring but if cut back can flower until frost. Leaves are evergreen in warmer zones.

Can be direct sown in early spring when all danger of frost has passed. Since seed is small starting indoors in pots is suggested. Sow in mid to late winter in flats or plug cells and use medium to light soil mix. Seeds require light to germinate so do not cover. Germination usually takes about 10-20 days but can be longer if conditions are not favorable. Transplant seedlings into individual pots when large enough to handle and grow on to about 6" (15.25 cm) tall before planting out. Harden off first. See general growing instructions for more detailed information.
Plant out in a full sun location. Best planted on cloudy day especially if rain is forecast. This allows plant to become accustomed to their area before being hit by bright sunshine. Space plants 12-24" (30 - 46 cm) apart as they will spread quickly. Water in well and water until established. Once established can be left alone with no further care needed. Flowers in first year but only sparingly. Second year will produce massive blooms in favorable sites.

Much prefers full sun. It will grow in light shade but tends to become straggly and does not flower much. Does well in hot dry areas and on poor soil. In fact does better on poor soil than rich ones. Once established it needs little water and is very drought tolerant. In prolonged droughts it will wilt and suffer but in most cases it will recover. Excellent as a ground cover in sunny areas. Very little maintenance needed. Can be added to lawns as it tolerates mowing and remains green even when lawns have turned brown from drought. As a ground cover can be left until fall then mown down to keep flower heads tidy. It will spread using creeping stems and self seeding and can become invasive if not controlled. Salt tolerant so will grow in shore/beachside gardens.
Some sites report use in shade, we do not recommend it. Plants become thin and straggly they do not function as a ground cover and don't flower. Perhaps in zones below 6/7 shade may work but not above.

Flower heads attract many beneficial insects to the garden. These may then prey on unwanted insect on other flowers or vegetables so acting as a biological control and reducing pesticide use. It is an excellent companion plant but be aware of spreading habit. Although we have seen it listed as a bee plant, our bees never touch it. Deer don't usually eat it, but will if there is nothing else around. (they have to be desperate).

Yarrow leaves are edible and can be used in salads or cooked. They do have a unusual flavor and can be a sweet bitter taste so experiment before adding too much. Was once used instead of hops to flavor beer and added to wine. An interesting wine can be made using the flowers.
An essential oil from the flowering heads is used as a flavouring for soft drinks.

Usually the wild white flowering yarrow is used medicinally, especially if the flowers are used but the leaves of all are equally good.
Yarrow has been used in Europe where it is native for a very long time as a healing herb. It is high in silica and has resins that make it quite astringent. These properties help in repairing damaged tissues in the body and make it very versatile for treatment of wounds, cuts, burns, ulcers and other skin disorders. It is very useful in stopping the flow of blood in most places. Internally yarrow is used to aid digestion and to prevent diarrhea and dysentery as well as helping to reduce internal hemorrhage of intestinal lining. It is also used in the treatment of gastritis and as a tonic for the liver as well as gas and colic. Taken as a hot tea it is used to treat fevers, colds, flu and coughs as well as sore throats. It also functions as a diuretic promoting the flow of urine which helps remove excess toxins from the body and helps with treatment of cystitis, irritable bladder and stones. It is also used to help control menstrual pains and excessive monthly bleeding. It is also reported as a stimulant or tonic for the nervous system.
Is often used to treat colds and flu but is most effective if combined with Elderflowers (Sambucus nigra) and Peppermint (Mentha x piperita) for this malady.
Caution. Although it is used to stop blood flow in many places it can cause blood flow in the nose, hence one of its common names nosebleed. Therefore never insert any part of the leaves or flower into the nose it will cause bleeding.
Yarrow should not be used for extended periods as it can cause allergic skin rashes or lead to photosensitivity in some people. Some suggest that it might enhance the sedative effects of other herbs such as valarian, kava, hops and german chamomile as well as sedative drugs. Use caution if taking in combination with any of these and other compounds that could cause sedative effects.

Other Uses of Yarrow (Achillea millefolium).

The leaves have been used as a cosmetic cleanser for greasy skin[268]. Yellow and green dyes are obtained from the flowers