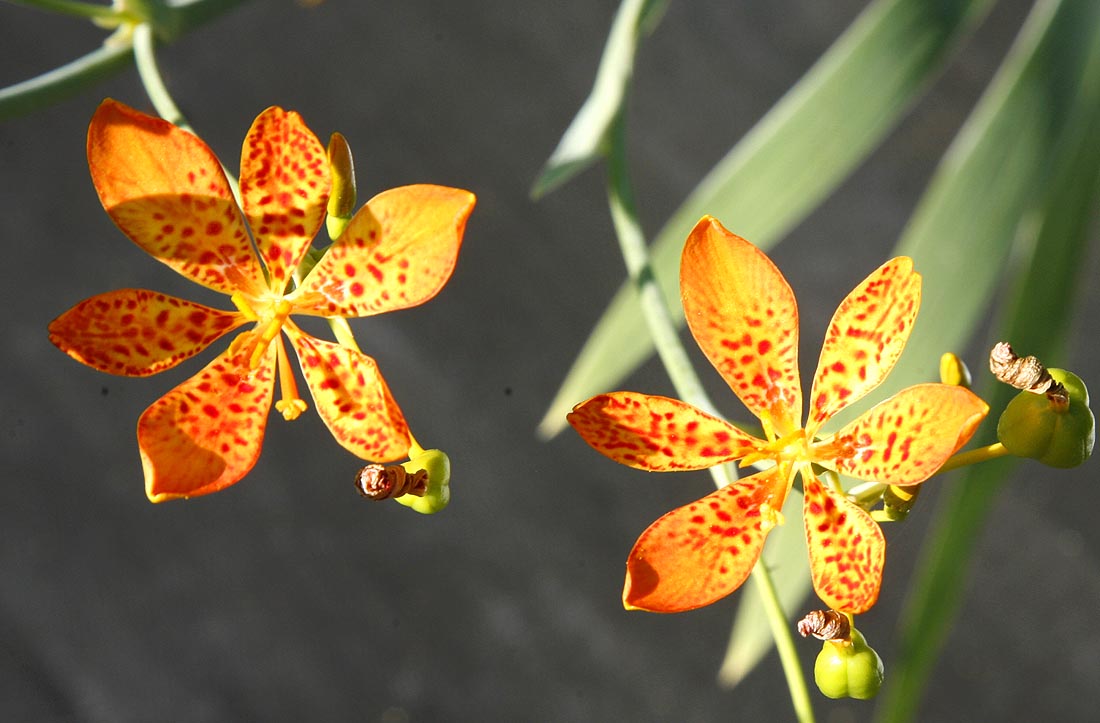 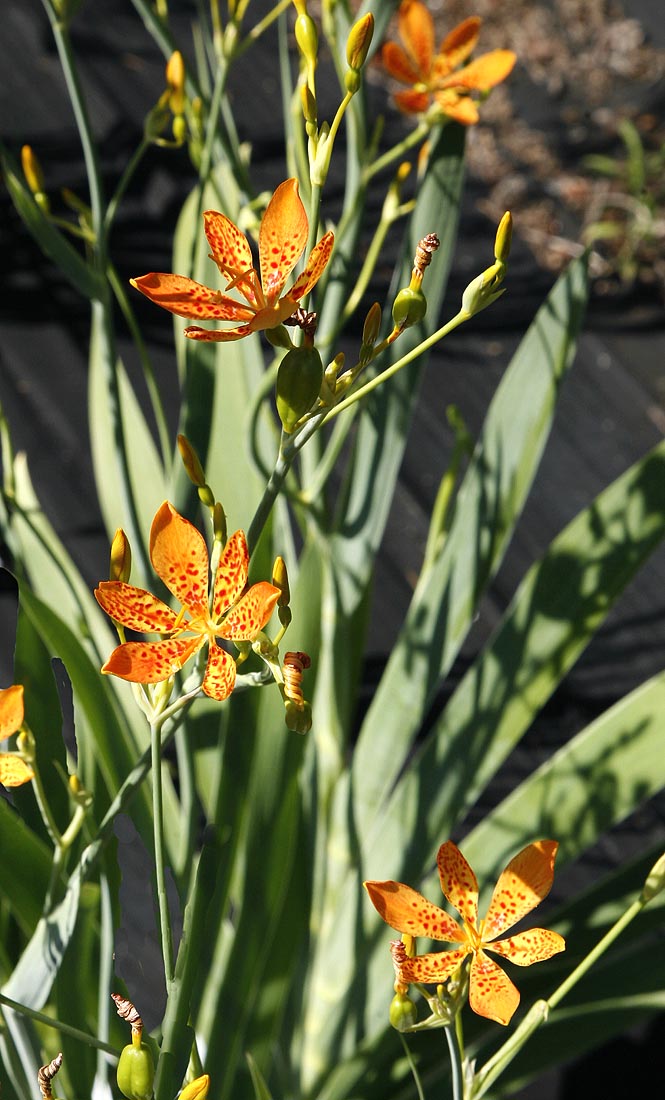 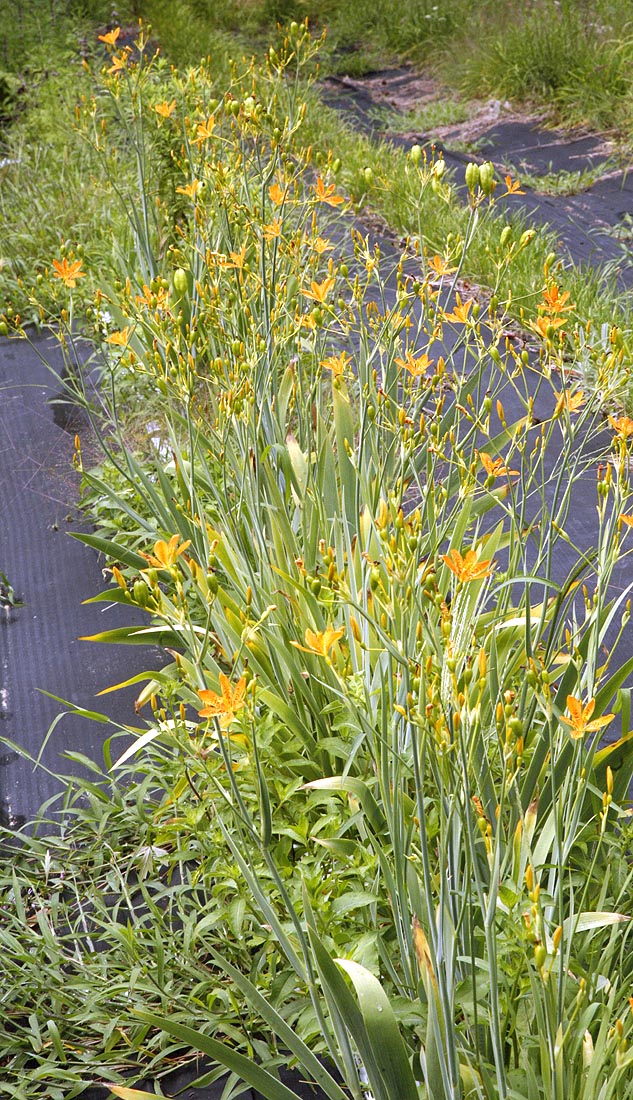 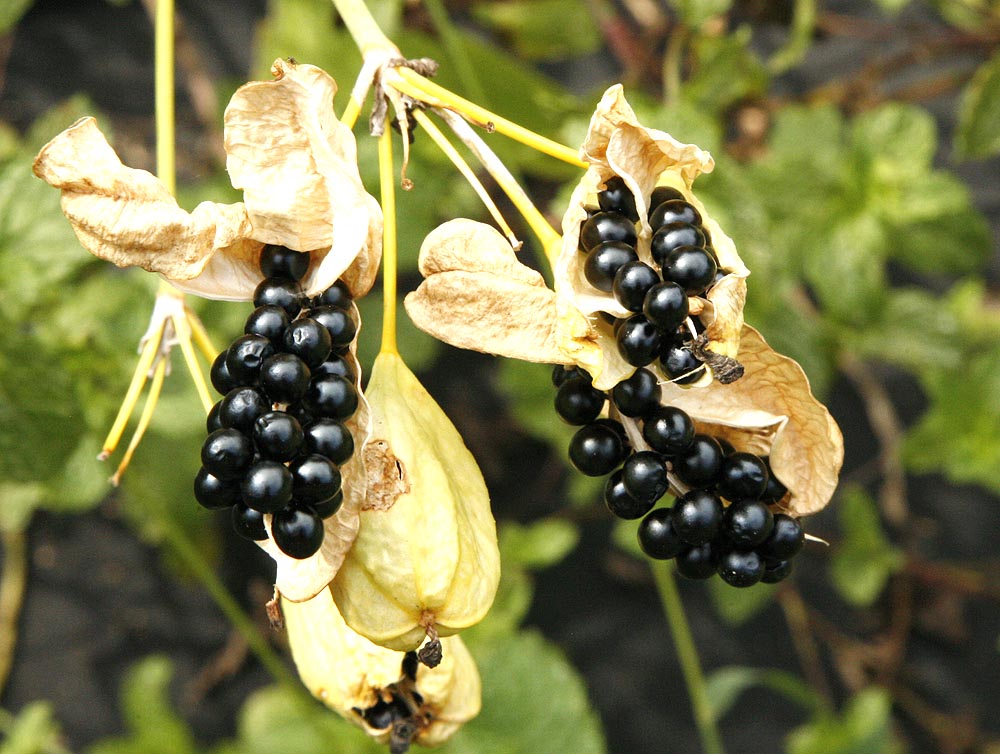 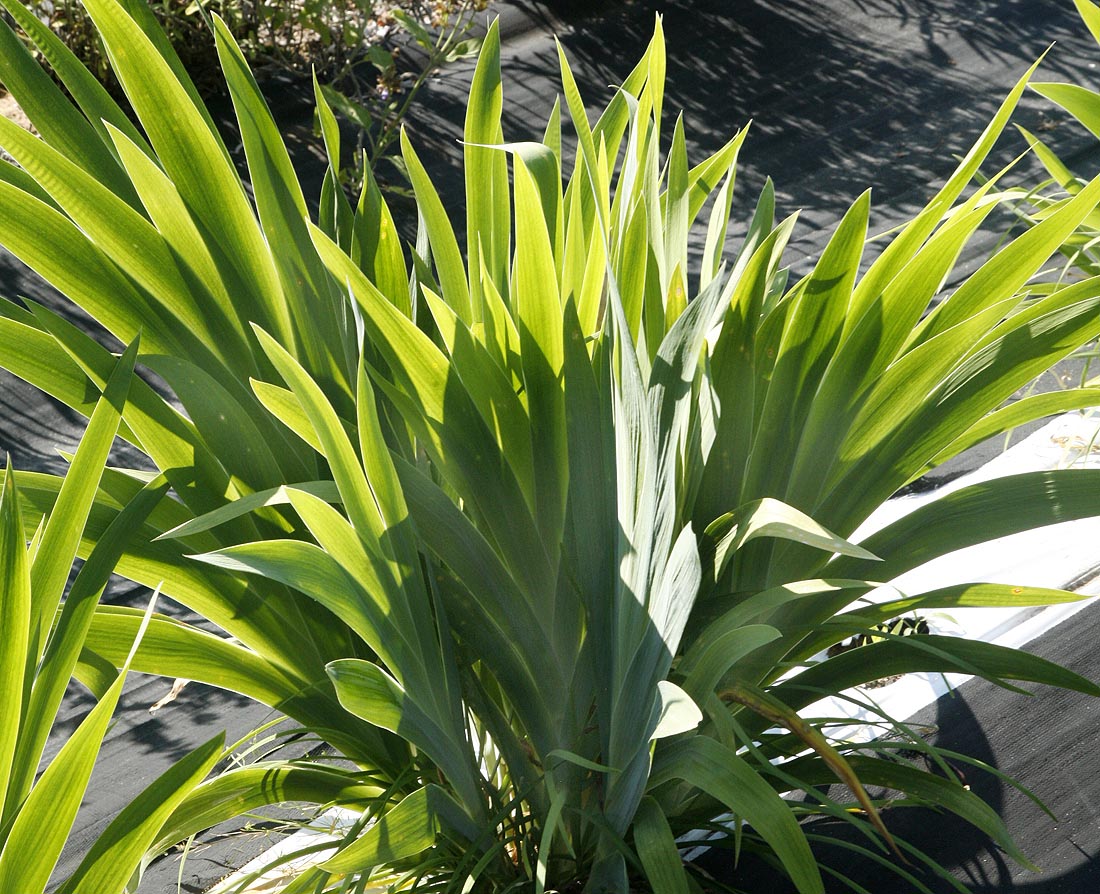 A unique plant that has leaves like an iris, flowers like a lily and fruit that looks like a blackberry (but is not edible). A tough little perennial hardy to zone 5 which needs very little care or maintenace once established. Likes full sun but can take a little shade, not fussy about soil type as long as its reasonably well drained. Needs little water unless in drought situation and will naturalize in meadow like settings producing lovely spotted flowers that bloom for about two months in summer. Not prone to disease and wildlife don't seem to eat it.

Description of Blackberry Lily (Iris domestica).
A tough perennial hardy to zone 5 with leaves more like an iris than a lily. Leaves are linear sword shaped leaves with parallel veins and are green to grey blue in color. They have smooth margins and are usually between 1' - 3' long most often grouped in a fan shape. From the center arises a stout pale green flower stalk that can be either branched or unbranched and rise 2' - 3 ½' in height. The stalk terminates in a group (cyme) of flowers. Each flower is about 2" across consisting of 6 elliptic oblong petals spread out like a wide star with three long yellow stamens in the center. The petals are orange with purple or dark red dots arranged in rough parallel rows across the petal. Flowers are produced continuously from the grooping with flowering beginning in mid to late summer and lasting about 1-2 months. Flowers are followed by oblongish shaped seed capsules which turn from green to straw colored when ripe and open to reveal a mass of shining black seeds that resemble a blackberry. Roots are bright yellow rhizomes with many fibrous roots.

Location and Care
An easy plant to grow and care for. It prefers full sun but can take partial shade. Its not really fussy about the soil type and is happy on sandy, loamy or even rocky soil as long as it is well drained. While it can do well in moist conditions it cannot tolerate waterlogged soils, it is also tolerant of semi dry conditions and does very well in meadow and prairie settings. Does not need to be watered much unless there are long spells without rain. Plants will be larger in richer soils with more water than in poor conditions but they are survivors. Its mostly a plant and forget sort of plant. It is hardy to zone 5 and while it is a fairly short lived perennial its life can be extended by mulching in colder zones to help protect the roots.
Suggested spacing is 12"-18". Clumps will slowly expand by creeping rhizomes. In optimum conditions it may self seed and form larger clumps, deadhead to prevent seeding and encourage more blooms. .
Flowers can be fairly small and plant does not attract much eye attention until a reasonable size with many blooms. Consider this when choosing a location for the plant as you may want to blend it with other plants that will accentuate the flowers and show them off to their best. The sword shaped leaves make a wonderful addition to any garden adding drama amongst more delicate leaves like Astilbes or fern-like foliage. Like most iris type plants the foliage is rarely bothered by disease or insect pests.

Blackberry lilies are particularly fond of dry prairie like conditions. In some prairie states this plant has escaped and naturalized into the prairies where it can be considered invasive. We recommend that you do not plant blackberry lilies near prairie remnants to prevent accidental invasion of native ecology.

Growing Blackberry Lily (Iris domestica) from seed
Germination of seeds can be slow and erratic. In most cases seeds need a period of cold before they can germinate. Many sources recommend stratification before sowing. We have found that keeping the seeds cold for a period of time before sowing will produce germination in most of the seeds. All of our seeds have been refrigerated before shipping. However since germination is erratic we recommend sowing inside so more control can be maintained over the seeds. Sowing indoors also provides for larger plants that may flower in the first year since they have had more time to grow. Seeds can however be planted directly if desired.

Sowing outside. Seeds can be sown in the fall for spring germination or early spring either when the ground is first workable or after frost has passed. Cover seed to about ¼" and water well until seedling are large enough to combat any small weeds alone. Since germination can be erratic weeds need to be removed from the area for a prolonged period of time. Seeds sown the previous winter may flower the first year, but spring sown seed mostly do not.

Sowing inside. Plant seeds in small individual pots or large cell seed tray in mid to late winter. Germination can be erratic so the ability to move plants individually without disturbing smaller or as yet ungerminated plants is best. Grow in pots until seedlings have at least two leaves about two inches long. Place outside to harden off before planting out in desired location. For details on seeding see our general growing instructions.

Medical Uses of Blackberry Lily (Iris domestica).
Blackberry lily rhizomes have long been used in Chinese medicine to treat a variety of diseases, most commonly sore throat, tonsillitis, bronchitis, malaria, cough, asthma, mastitis, acute hepatitis and gonorrhea. Its compounds strongly inhibit common pathogenic fungi, as well as some viruses, such as adenovirus and ECHO11 in cold and throat disorders. It has anti-inflammatory, antipyretic and analgesic effects as well as producing a significant diuretic effect. From the Chinese medicine perspective it clears heat, removing toxicity, reducing swelling and relieving coughs especially if accompanied by heavy phlegm. Recent studies have shown possibilities for use in treatment of certain cancers of the prostate and lung.

Other Uses
The seed branches can be used to great effect in dried flower arrangements.

What is blackberry lily?
Well its not a blackberry and its not really a lily either. Its actually more of an iris. The leaves are very iris like, while the flowers do look more like a lily and the fruits do resemble blackberries albeit rather large ones. This is a unique plant with no other close relatives and is the sole species of the genus Belamcanda. The flowers although they look like lilies have only three stamens while lilies have 6. For some considerable while it has been a dilemma for botanists. Recent DNA sequencing has finally determined that this plant is far more Iris than lily thus it has been moved from its original family to the iris family and given a new nameIris domestica. This name was chosen since Iris chinensis had already been taken. While accepted by many gardeners and botanists the plant is still referred to by its original name by many who are used to the older name.