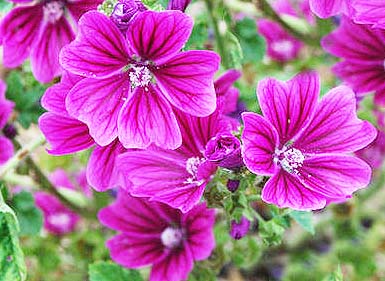 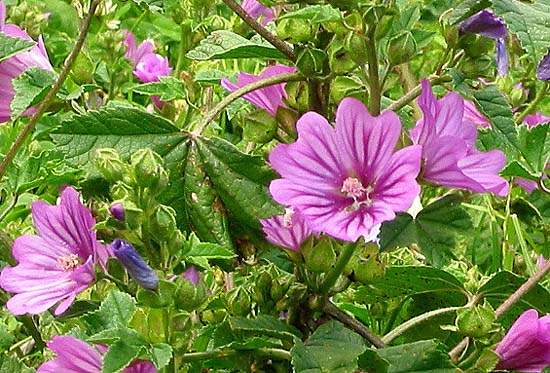 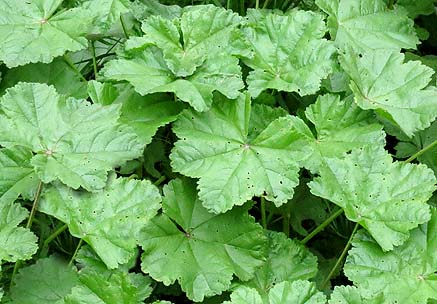 Mallow is a delightful plant for the garden. Its very easy to grow and takes almost no work once established. Its drought tolerant and will grow on most soils as long as they are well drained. For the most part it is a hardy perennial that flowers profusely every year and is loved by butterflies, but due to its high mucilaginous content is avoided by wildlife. Plant in full sun and cut down the stems at the end of the year. That's all you need to do to enjoy this beautiful plant.

Description of Common Mallow (Malva sylvestris).
Mallow is an unusual plant in that it does not always behave in exactly the same manner at all times. While it is most commonly found growing as a shrub it can also grow along the ground and look more like a ground cover. In most cases it acts like a hardy perennial that dies down to the ground during the winter months, but in some cases will behave like a biennial living only two years, but sometimes as many as four. Most likely the growing conditions are the cause of variation but no specific studies have yet been done to verify this.
For the most part it acts like a hardy perennial shrub. In early spring it sends up many stiff upright stems that can reach 4' ( 122 cm) in height. Stems are most commonly linear with little major branching. The leaves are bright green broadly flat and palmate with scalloped or serrated edges and slightly crinkled appearance and long thin stiff stems which are covered in fine hairs. Leaves on the upright stalks tend to be slightly smaller and are arranged sometimes alternatively and sometimes in pairs. The flowers are borne in profusion at each leaf axis, sometimes directly from the leaf and at others on small branching stems as many as six to a leaf axis.
Flowers have five large notched petals that are usually pink or mauve in color with darker purple veins radiating from the central column of fused stamens. Flowers are 2-5cm wide bloom from mid to late summer often so prolifically that the whole bush seems to be a mass of flowers.
The flowers are followed by flattened rounded seed pods known as 'cheeses' due to their shape. The whole plant is a slightly downy look and feel and is very mucilaginous making it mostly unpalatable to wildlife.

Growing Common Mallow (Malva sylvestris) from Seed.
Mallow is an easy plant to grow and the seeds tend to germinate readily. While direct sowing is possible with Mallow seeds sowing inside allows the plants to have a head start of the season and provides more control over your plants. Follow our general growing instructions for best results.

While seeds can be sown at any time starting in spring provides the longest growing season. Germination is best between 53 - 68°F (15-20°C) but plants will grow at higher temperatures. Prick out seedlings to their own pots when large enough to handle and grow on gradually hardening off before planting.

Mallow plants will spend their first year establishing their root systems and usually flower prolifically in their second year.

Location and Careof Common Mallow (Malva sylvestris)
Where you locate your Mallow plants will determine what format and how they grow, - for the most part, Mallows can be a little unpredictable with their form and you may need to experiment a little with location to find the form most desirable to you.
Light. For the most part Mallow likes a full sun location but it can tolerate some shade. For warmer zones with higher levels of sunlight some shade is suggested during part of the day, preferably around noon. Mallow a very tough hardy plant and is very cold tolerant surviving down to -4° F (-20°C). Thus in warmer zones (8 and more) it is recommended that the plants be placed where they can catch breezes to ensure that they do not overheat during the hot summer months.

For zones 5-7 a full sun location is ideal. Some shade can be tolerated during early morning and late afternoon and still keep upright habit. Zones 4 and lower full sun in recommended and a good mulching of the roots in late fall to help them overwinter. With a little mulching this plant will perform well for many years.

Soil type. Mallow is not really fussy about soil type but it does need to be well drained. Mallow cannot tolerate wet or waterlogged soils, especially those that tend to hold water during the winter months, as this will often rot the overwintering roots. It is quite happy on poor soil but adding some extra compost will produce a much better crop of leaves and flowers. If leaf production is required then providing a good compost dressing feeding of nitrogen rich fertilizer is not recommended as these plants tend to concentrate nitrites in their leaves.

Mallow is very resilient growing well in meadows like settings, sandy soils and even gravel. It is fairly tolerant of salt so is a good choice for coastal gardens.

Water. Mallow is fairly drought resistant once established. Recommended that first year plants be watered on a regular basis to allow them to establish their roots. Subsequent years watering can be reduced or even eliminated unless there is a very heavy drought. Unless leaf production is required then more water will be necessary.

Spacing. Mallow plants tend to grow larger with age. They can be planted in clumps or even used as a seasonal hedge. Allow at least 48" (121 cm) between plants to ensure they have enough room to expand.

Prostrate forms.
While there is no specific experimental data to determine why mallow sometimes takes a more creeping ground cover like form it seems that lower light levels and some poor soils will encourage this behavior. If a prostrate form is desired try growing in higher shade and/or on poor soil.

Pest and diseases.
Mallow is prone to rust fungus that makes the leave turn brown or festooned with brown spots. If harvesting ensure that this is completed before the rest arrives and do not harvest leaves that have any rust on them.

Harvesting Common Mallow (Malva sylvestris).
Do not attempt to harvest anything from first year plants.
Leaves. Best harvested in early to mid spring, when leaf production is at its greatest. Later use only newer bright green leaves do not harvest older leaves they tend to be tough and unappealing.
Flowers. Any time the plant is flowering.
Roots. Usually harvested in the fall after plants have gone dormant. Either dig up whole plants or remove a few roots from larger clump when plant reaches a size that will allow it to withstand some root removal.

Culinary uses of Common Mallow (Malva sylvestris).
Most commonly the leaves are used. They are edible and have a very pleasant flavour that some prefer in salads to lettuce. They can be used raw in salads or cooked in soups and stews as a thickener. The flowers are also edible and make a very tasty and interesting addition to the salad bowl.
Seeds are also edible and have a pleasant nutty flavour, however collecting them tends to be very time consuming so in most cases they are treated as 'wild snacks' eaten when outside and collected as you wander.

Medical uses of Common Mallow (Malva sylvestris).
Leaves and flowers have been used for centuries to treat many ailments. The mucilaginous content of the leaves is considered very beneficial and can be used to treat many different maladies. These include all kinds of digestive issues, chest ailments, coughs, bronchitis, inflammation of the mouth. throat infections and emphysema. For the most part however for internal use Mallow is considered a secondary herb to Marshmallow which has very similar more effective properties. Mallow tends to be used more effectively externally to wounds, boils, bruises, skin rashes, insect bites, pimples, eczema, acne, sunburns, skin inflammation, and swellings

Warning.
When grown on nitrogen rich soils - especially those that are cultivated inorganically - the plant tends to concentrate high levels of nitrates in its leaves which can be dangerous. In all other cases the leaves are very wholesome and good.

Other uses of Common Mallow (Malva sylvestris).
The stems contain a fiber that is useful making paper, cordage and textiles. Yellow and green dyes can be obtained from the plant and the seed heads.