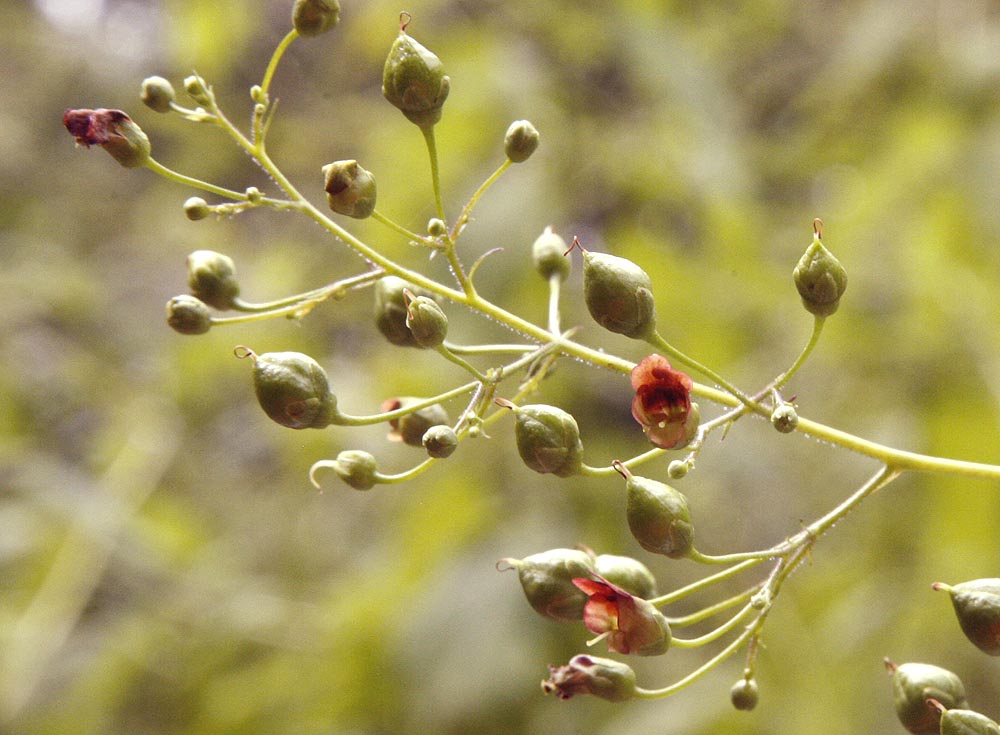 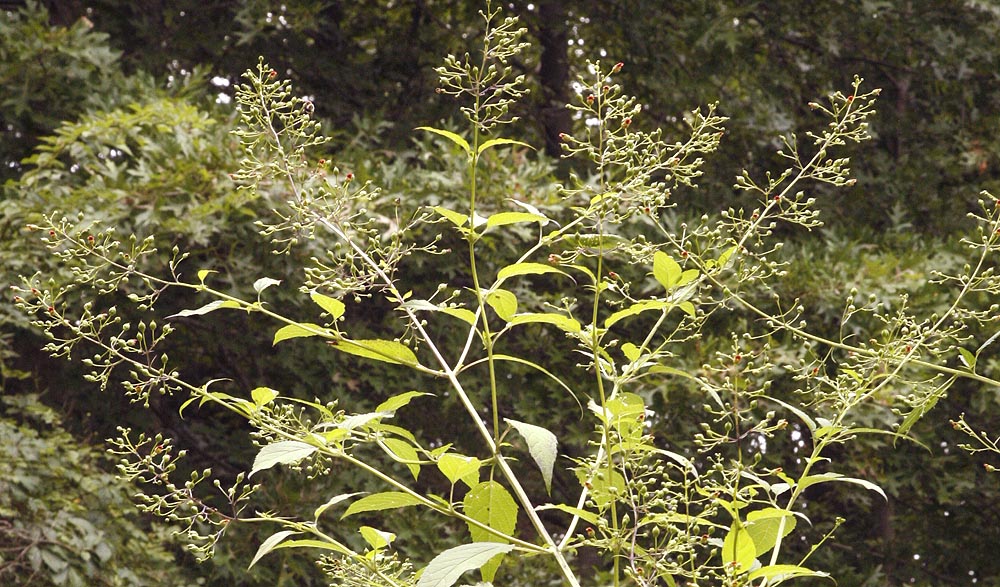 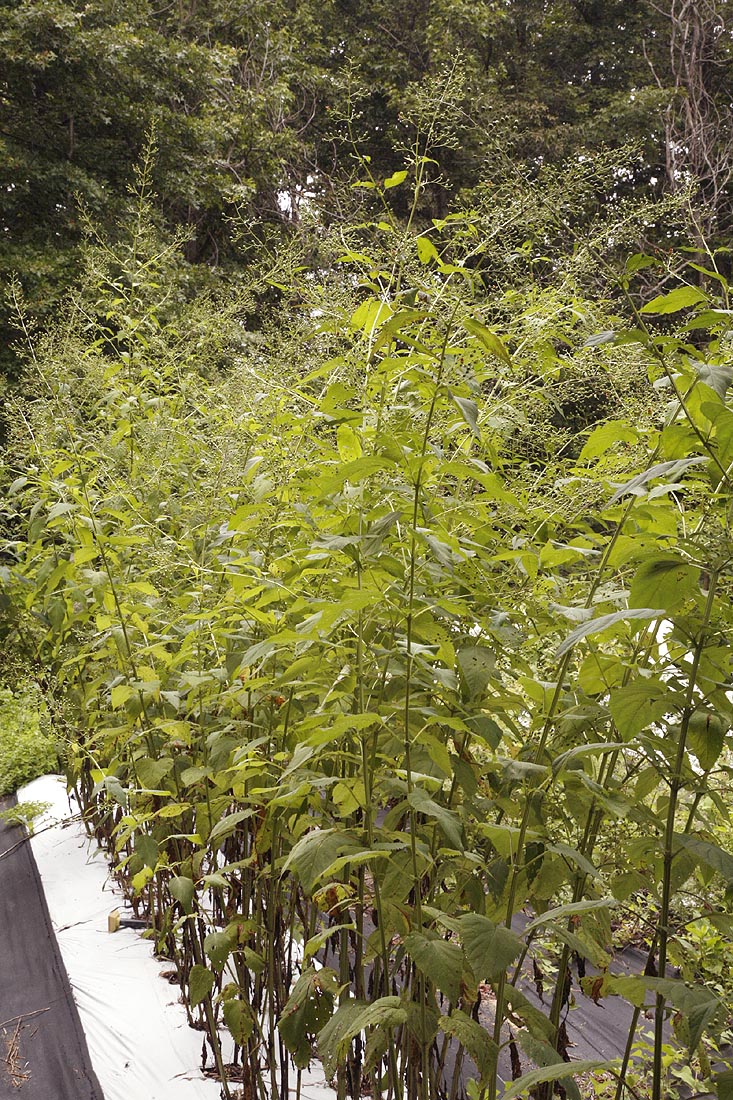 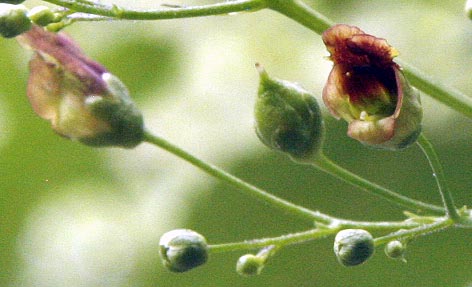 Tall native American perennial hardy to zone 4 that loves shade and can tolerate wet soils. It is also one of the best nectar producing plants there are so much so that the Xerces Society has given it special status because of this and states it has "Special Value to Native Bees: recognized by pollination ecologists as attracting a large numbers of native bees" and "Supports Conservation Biological Control" - A plant that attracts predatory or parasitoid insects that prey upon pest insects."

Certainly if you grow this you will immediately see what they mean as butterflies, humming birds and bees will flock to the tiny flowers that are produced in prolific numbers for a long period of time. It's a pollinator magnate.

Does it get better? Yes it does because this plant likes shade. It will do well in fairly shady areas and not only that it will tolerate fairly wet soils too. It will grow equally well on well drained soils and is even moderately drought tolerant although this will reduce its nectar production so a little water help is suggested.

While its name suggests it flowers late that really means it starts around Mid June and continues until about October or even early November if the days stay warm. Its a very easy plant to grow but it is tall up to 10 feet (3m) so choose a good spot for it where it can just grow and you can enjoy the visitors. The flowers are not that large so its not a showy plant but the visitors don't care. Its also the host plant to caterpillars from several different butterflies but the strongly bitter leaves make it unpalatable to wildlife so deer and rabbits don't eat it.
Takes almost no maintenance once its established just cut or mow down the stalks at year end and you are done. So if you have a shady spot you could not do better than to grow this.

Description of Late Figwort (Scrophularia marilandica).
Figworts are most commonly identified by their stiff square stems which is what gives them the common name 'carpenter square'. While plants in the mint family also have square stems they are not as distinct stiff and accurately square and tall as the Figworts.
Eastern figwort is a perennial plant that dies to the ground every winter. In spring a rosette of leaves appears. Leaves can be up to 7 inches ( 18cm) long and 3.5 inches (9 cm) wide. They are spear shaped with serrated edges with a sharply pointing tip. The leaf stalk can be up to half the length of the leaf blade with a grove down the center. Leaves are attached to the stem in opposite groups of two but smaller leaves may also arise from the same nodes and the flower stems also arise from here.
Stems rapidly grow, in the first year to about 3 feet (1 m) but in subsequent years can reach 8-10 feet ( 2.4-3m) in height depending on growing conditions. The lower portion is opposite leaf groups with large leaves but about 18 inches (46cm) from the ground the stems branch and produce flowering branches with smaller leaves along the length of the stem.
Flowers are produced in open branching clusters at the top of each stem. Each flower is small up to 0.3 inches (0.7cm) long and 0.25 inches (1.3cm) across tubular with a rounded base. It looks rather like a small rounded bottom pot with two upper overlapping lobes in dark burgundy on one side and green on the outer side. The lower lobe has a group of stout yellow stamens near the base. from the side the flower looks like a bee has dived into a small green pot! Flowers open at different times so there are always some flowers open in a cluster with small round unopened flowers arriving. The plant flowers for a long period. Flowers are not showy but are full of nectar and attract a lot of pollinators. The flowers are followed by dull brown teardrop shaped seed capsules about 0.25 inches ( 0.5cm) long containing small brown seeds.
Growing Late Figwort (Scrophularia marilandica) from Seed.
Seeds need light to germinate so do not cover. Many sources suggest that the seeds need stratification (a period of cold) before they will germinate. Moist stratification does not seem necessary so we store all our seeds in a cold environment before they are shipped to you making germination easier.
Seeds can be direct sown either in late autumn or very early spring, or they can be sown in pots or trays in later winter for early starting.
On arrival place your seeds in the refrigerator until ready to plant, then plant as you would any other seed. Use a good well draining seed mix do not cover the seeds. Place seeds in good light and keep moist. Use a spray bottle to water so that seeds don't accidently become covered with seeding mix. DO NOT use a heating pad as these seeds prefer cooler temperatures to germinate. For more detailed information on starting seeds see our General Growing Instructions.
Location and Care of Late Figwort (Scrophularia marilandica).
Prefers partial to full shade for best results does not do well in full sun. Pick a location that will allow for tall plants as plants can reach 10 feet (3m) by their second year. Can grow in either well drained or slightly wet soils and is often found by river banks if they are shaded. Ideal location is under deciduous trees and near woodland edges that don't get too much sun. Does not do well in fully wet soils. Leave leaf litter to decompose around plants and mulch them for winter and provide food for next year. Can tolerate some drought but will need some water in prolonged drought.
Plants contain many alkaloid compounds making them very bitter so they are not eaten by wildlife. Once established they are not keen on being moved so pick your location well. Cut plant stalks to ground before all the seeds drop or they will self seed. Its not possible to collect all the seeds as they can form while other portions of the cluster are still flowering and producing nectar.
Harvesting Late Figwort (Scrophularia marilandica).
Leaves are used medicinally and are best harvested in early summer as the flower stalks begin to rise. Roots are dug in fall when plants become more dormant.
Culinary Uses
None.
Medical uses of Late Figwort (Scrophularia marilandica).
Very bitter herb is often used as a tonic and some variety of figwort has been used in Traditional Chinese medicine for this purpose as a yin tonic since around 200 AD. It helps to support detoxification of the body and to treat skin disorders, swollen lymph nodes and poor circulation. The roots are used to make a tea for treatment of irregular menses, fever and piles as well as a tonic. The whole plant is used as a mild purgative and stimulant and is anti inflammatory and mildly diuretic. Can be used as a tea or tincture. Externally a decoction is used to treat swellings, sprains, burns, psoriasis and inflammation, scrofulous sores and even gangrene. The leave can me made into an ointment or even applied fresh.
This plant should not be used for those with heart conditions or during pregnancy.
Pollinator and Wildlife with Late Figwort (Scrophularia marilandica).
Is the larval host to many different butterflies these include Baltimore Checkerspot, Fulvia Checkerspot, Gillettes Checkerspot, Chalcedon Checkerspot, Arachne Checkerspot, and Dotted Checkerspot. Its a magnate for all kinds of nectar gatherers due to the high quantities it produces so is usually covered in bees, butterflies and visited by humming birds.
Other names.
Simpson's honey plant, Carpenter's Square, Eastern Figwort, Maryland Figwort